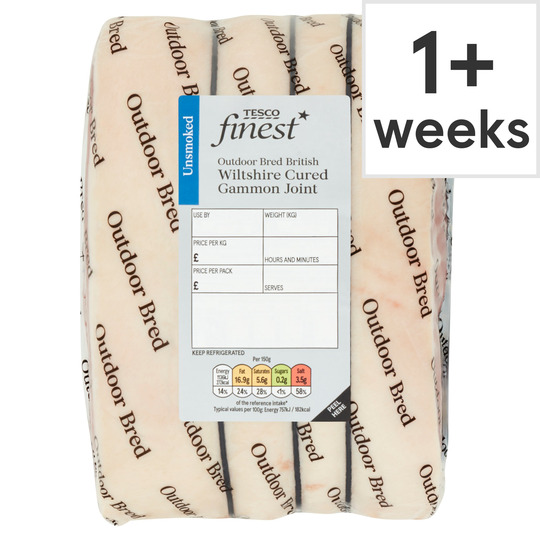 The chosen weight of this product is only a guide, you will receive the closest weight available

The chosen weight of this product is only a guide, you will receive the closest weight available

Suitable for home freezing. Ideally freeze as soon as possible after purchase but always by 'use by' date shown. Not suitable for cooking from frozen. Defrost thoroughly for a minimum of 24 hours in the fridge. Once defrosted use on the same day and do not refreeze. Keep refrigerated. Once opened, use immediately.

Instructions: Temperature: 190, 170, 5
Time: 30 mins per 500g plus 50 mins
190°C/Fan 170°C/Gas 5 30 mins per 500g plus 50 mins Allow joint to rest for 10 mins allowing the colour to return and the natural odour to dissipate. Place in a roasting tin and cover loosely with foil. Calculate cooking time at 30 mins per 500g plus 30 mins. Cook in the centre of a pre-heated oven. Remove foil for the last 10 mins of cooking time. Allow joint to rest in a warm place for 10 mins before carving. For crunchy crackling, the rind is already scored for you, follow the cooking instructions above but do not cover with foil. Remove strings, carve and enjoy hot or cold. Do not overcook.

Unfortunately the joint I received was about 35% fat .. so unfortunately will not buy again

Far too salty even after soaking over night! Couldn't eat it.

Smelt awful when cooked and cooled.

We bought two in the half price offer, but when cooked it smelt awful, like a fatty off smell. We sliced it ready for the week but couldn’t face it and threw it away. Was there something dodgy about these joints as they were half price? I have heard that whatever pigs eat can reflect in how the fat smells.

27% of the total weight of my joint was the outer layer of skin and fat. Indeed, excess skin/fat not even attached to the meat had been left on the cut, presumable to deliberately ‘bulk out’ the joint. This joint should be renamed from Tesco’s Finest to Tesco’s Fattest.

Soaked overnight, roasted for 1.5 hours, glazed with Engish mustard and dark brown sugar for about 1.5 hours. Absolutely fabulous, ooh la la, yum. And half price, what is not to like?

Delivered 14/3/2020: A very good cut of meat. I soaked it overnight, but I think there was no need for it because it wasn't salty at all, I tasted the water after soaking and it wasn't salty at all. It surprised me that nothing was written on the label about preparation. I would buy it again, in the hope that the future batches will be of the same quality.

Was a bit worried as I read previous reviews. Was my first attempt at preparing ham for Xmas. Bought the gammon joint as it was good value. Did not have a clue what to do. Followed others suggestion and soak overnight. Found a very interesting recipe for glaze but did not have 3 hours for the boiling. Had a brainwave why not put it in pressure cooker. As I have a large one pot seems the obvious way. Set it for 60 mins and left it. Result a superb joint done to perfection. Baked for 30 mins for the glazing. Only criticism did not have instructions on package.

I have today just cooked this as per instructions. I was looking forward to eating a slice but it was so salty its was worse than swallowing sea water. I think this would make us ill if we ate this much salt. If this needed to be soaked first it should of said so in the instructions. This was a complete waste of my money and has ruined our Christmas Eve meal. I expect much better from you Tesco. A very disappointed customer

As previously stated this gammon joint is far too salty. I usually soak then boil a gammon joint, been doing it that way for many years, but thought that I would buy a Finest joint and follow the instructions to roast it. There’s no mention of soaking so I assumed that it wasn’t necessary. The joint has taken longer than detailed to cook, used a meat thermometer to check, and I am now trying to rescue the meat by simmering it in a pan to remove some of the salty taste. I am an experienced cook and I have never had this problem before. What a waste of money.

gammon steaks have higher salt, so as gammon it ha

gammon steaks have higher salt, so as gammon it has normal salt, if you want ham, you have to boil it for about an hour before you roast it,