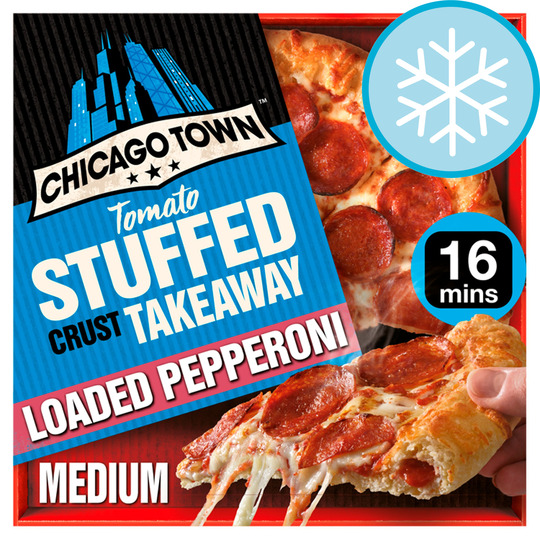 1/2 of a cooked pizza contains

of the reference intake*
Typical values per 100g: Energy (as consumed) Per 100g

See Side of Pack for Best Before End.Keep frozen and store flat. Do not defrost. Keep at -18°C or cooler.

Each pack contains one pizza, one pizza serves 2 people

For an oven pizza...chicago is the best ... but little cheese on it. Pepperoni nice however

Inedible. This has to be placed on a baking tray rather than directly on the oven shelf and it just sticks to it. By the time I'd scraped it off even the dog wasn't interested. Shame because I had another type that was lovely. (Tiger crust version)

After finishing this pizza left with a horrible ta

Removing the piece of card that made it actually c

Removing the piece of card that made it actually cook, presumably to save money, makes for a terrible customer experience.

Bought one last night because they're on offer. Very disappointing. The sauce lacks flavour and though there was plenty of pepperoni for an even coverage, the cheese was sparse.

Rubbish quality , as flimsy as a pancake , awful

Rubbish quality , as flimsy as a pancake , awful

No flavour at all, the stuffed crust is a bit of tomato puree. Will not be getting again.

Not really stuffed crust, more crust folded over some extra tomato sauce. No cheese in there like a normal stuffed crust