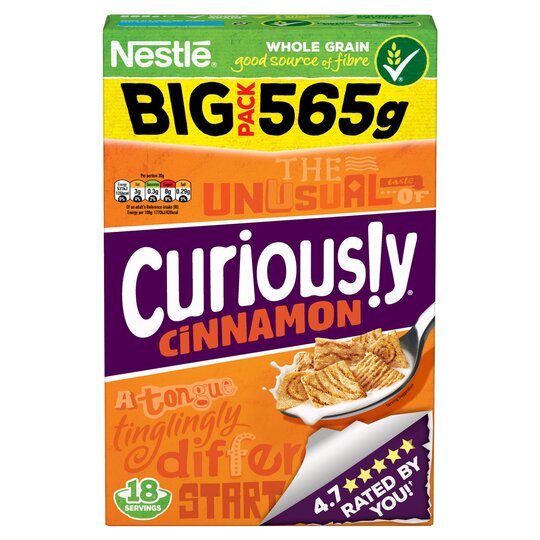 of the reference intake*
Typical values per 100g: Energy 1770kJ

18 servings in this pack

Very nice flavour but for me I would like it a stronger flavour I will buy again Cinnamon is good for helping to keep blood sugars lower.

I basically lived on these for about a decade, until the early 2000's. They were in a white box then and called Cinnamon Grahams. These are not they. Far less cinnamon and far more sugar, leading to something that actually tastes synthetically cinnamon flavoured. Sad, I really used to love these. Lesson learned.

I really love this cereals. I like it with milk, or mixed into to a nice pot of yogurt as a special treat. I love the cereals bars as well. I eat this cereal as breakfast or a snack. Should start selling merchandise for this cereal.

They taste the best!!

Great cereal, all the family love it and the cinnamon taste!!

These are really addictive, especially if you have a sweet tooth and like the taste of cinnamon. Everyone loved them and they have a great crunch and texture, the flavour even stays in the milk when you finish the cereal. I'd definitely recommend them!

Deliciousness in a bowl

First time I'd tried these, delicious!!! These are really tasty with or without milk found myself dipping into box as a snack.. Very enjoyable!!

What's better than cereal... cinnamon cereal of course! Absolute favourite in my house.

Great for a sweet breakfast and you can also just snack on them dry if you get hungry.