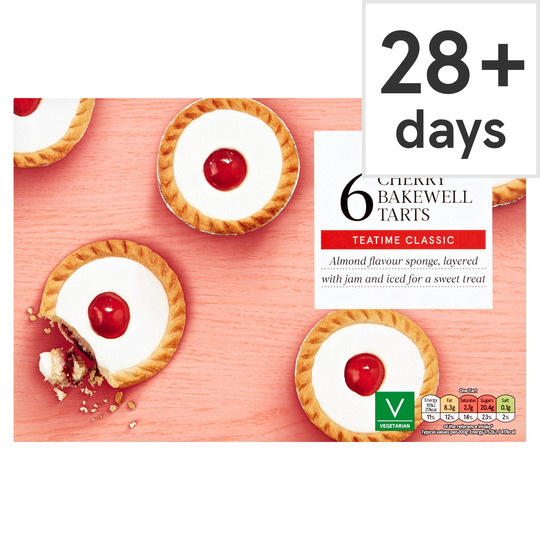 Worst cherrybakewell I have ever had. Thrown them away. Tried them on my 30 year old son who had half of one and said they are awful and passed the 1 and half back. which went straight to the bin. Best ever cherry bakewell Co-op!

Horrible - Don't waste your money on these.

In my opinion these are a waste of money - I wouldn't eat them if they were free. They are nowhere near as nice as Mr K's version.

Where as the Taste Gone

These use to be a lovely tasting tart and was on par with Mr Kipling but now they are tasteless and a total waste of money, Tesco needs to realise that customer will not buy any old rubbish just because it is cheap they want flavour as well.

Not nice. The almond essence flavouring was so str

Not nice. The almond essence flavouring was so strong it left a chemical taste in the mouth. The filling is also quite sloppy so they did not have a good texture. I will not be buying them again.

These are awful. They are 'sickly' sweet - and that's coming from someone who has an incredibly sweet tooth! The icing is just a pure sugary sludge which taste of nothing but crunchy crystals. In this day and age, with everyone trying to reduce their sugar intake, it might be worth Tesco's revisiting the recipe; a good start would be to cut the sugar content by half. Even the children left some, they just found them far too sweet and so a pile of icing was left on the side of the plate!

Bought these as they were significantly cheaper than the usual well known brand that I buy and for the most part I find tesco's own brand pretty darn good in most cases. However these have a most unpleasant aftertaste and the filling is not as generous or evenly spread in comparison to the other brand.

Much better than Kipling's version: not only slightly bigger (I think) but the pastry doesn't crumble if you attempt to lift it up.

Cannot put my finger on what the taste is

Strange slightly chemical taste to these cakes, maybe its the almond flavouring but its not nice. Will not be buying them again.