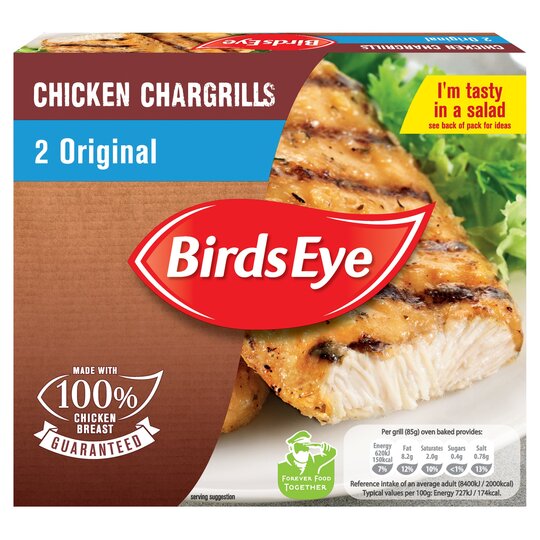 of the reference intake*
Typical values per 100g: Energy As sold 100g provides:

Bought these for a quick mid week meal they were disgusting. The outside came out slimy the inside was like mush even after putting them back in to see if it would make a difference if they had a longer cook time made no difference to the outcome. These are by far the worse thing we have had and has put me off buying any Birdseye chicken products. Disgusting!

Horrible. Covered in fat and tasteless. Doesn't even resemble chicken. Used to buy these years ago and they were quite nice but I would never buy again.

I LOVE these so much! They're just delicious. My only complaint is I want more in the pack!

Agree with others. These are awful! They aren’t chicken breasts, rather particle board chicken made to look like a chicken breast. There is an odd flavour and they are slimy and mushy even though they’re baked in the oven.

I don't use the word 'hero' likely but the person who made these is truly that. God bless you!

whatever they use in the 25% of the product that isn't chicken triggered a migraine for me. The glaze looked like cheese although nothing in the ingredients stated this was the case but I had a migraine after eating. I won't be eating these again.

Tried it first time today. Do not buy. Makes me want to throw up. Leaves the worst after taste you can imagine!

These were probably the most disgusting thing we have ever tasted. Didn't taste anything like chicken, just soft and slimy processed rubbish which went in the bin...

Tried this for the first time today thinking you can't normally fail with a birds eye product but this was the absolutely foul and extremely salty, wouldn't recommend this at all!

I bought 2 packs of these for a quick tea with chips and wish i had just had egg and chips instead. the grills did not look appetising when cooked and oozed a watery liquid. we all scraped this off and ate the chicken but it was really disappointing. unfortunately i have one chargrill left - we will be fighting to see who does not have to eat it. I was also disappointed to see that they contain palm oil