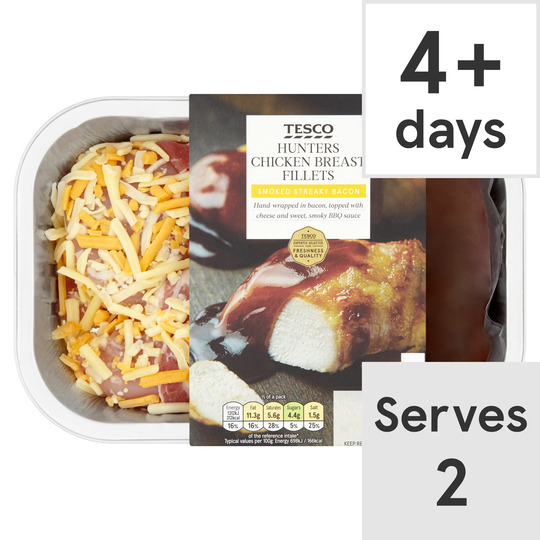 Suitable for home freezing. Ideally freeze as soon as possible after purchase but always by 'use by' date shown. Defrost thoroughly for a minimum of 24 hours in the fridge. Once defrosted use on the same day and do not refreeze. Follow the preparation guidelines above. Not suitable for cooking from frozen. Keep refrigerated below 4°C. Once opened, use immediately.

Instructions: 190°C /Fan 170°C/Gas 5 35-40 mins Place foil tray on a baking tray in the centre of a pre-heated oven for 15 minutes. Add sauce from sachet and cook for a further 20-25 minutes. Stir sauce thoroughly before serving.

It's a very strange meal...the chicken tastes like processed chicken, the sauce is strong but very synthetic tasting, the cheese is tasteless and the portion size is very small...not impressed at all.

Why oh why can't they use British chicken?

Why oh why can't they use British chicken?

Not what it said on the tin

Wasn’t a whole chicken breast, but both were just scraps of chicken hidden under a sauce. Not impressed

I havent bought them for a month now as the last ones I had were very small they have shrunk? So will not be buying them in the near future. It seems a lot of your product have now changed size and quolity, : (

The BEST store-bought hunters chicken! Both the chicken and the bacon were of good quality. The sauce was quite a strong BBQ sauce, however, I personally like that. I know a lot of reviews mentioned that the breast sizes are small but I think that they are perfect and filling as part of a normal-sized meal. I would definitely suggest that you keep it in the oven for at least 10 minutes longer as its never quite done after the cooking time stated on the pack. (However, this may just apply to my oven!)

Smaller than a sparrows leg

Well I'm not sure it was even chicken It was the size of a sparrow! Feeds 2 people ?? Yeah maybe during ww2 when food was rationed but not in 2020.

Chicken itself was lovely but not nearly enough for two people. One chicken breast cut in two, with the sauce taking up more of the container than the chicken - this was concealed by the cardboard packaging. I thought I had been given one breast by mistake. Won’t be buying again!

One of the better hunters chicken . We add some ex

One of the better hunters chicken . We add some extra cheese

Tried this and was sorely disappointed. Lots of over-the-top sauce. Two HALF breasts of bland tasteless chicken. The little slivers of bacon were OK.

All in all a good blend of chicken, bacon and barbecue sauce (a bit light on the cheese though). Plenty for two. We've had these from frozen as well and they taste just the same.