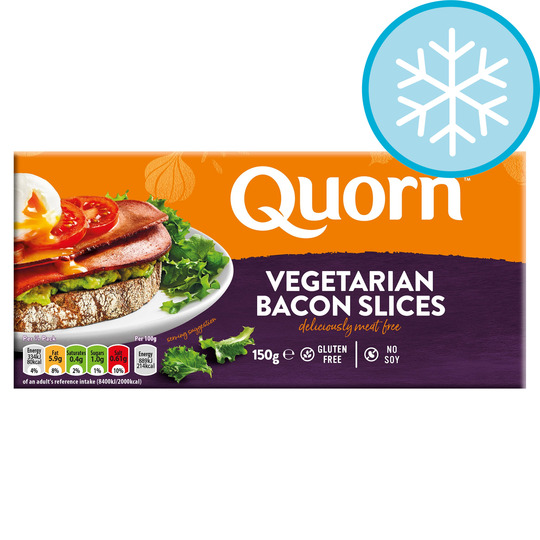 8%of the reference intake
Saturates
0.4g

2%of the reference intake
Sugars
1.0g

10%of the reference intake

of the reference intake*
Typical values per 100g: Energy 889kJ/214kcal

Keep frozen below -18°C. Do not refreeze once thawed.

Cooking Instructions
Instructions: Defrost thoroughly before use. Remove all packaging.
For best result Hob cook.
All appliances vary, these are guidelines only. Check product is piping hot before serving.

Well, I gave 'em a go. Won't be buying again as I'm not into slimy rubber like things. They may float your boat, but not mine.

I was prepared to try this with an open mind - but after a couple of bites the burnt chemical taste set in. If you like your bacon crispy then don't buy this, as it can't be crisped up without tasting horrible. But slightly undercooked, pink and floppy, then it's ok - don't 'eat it with your eyes', though. The only good thing about this is that some poor creature didn't have to die to get eaten - however, some poor human had to eat this bacon substitute instead, to save wasting it (since too many people on here just bin food without a thought in their head for the billions of tons of edible food that is wasted on this earth every day - which is an unsustainable waste - also, when others in the world don't have enough to eat and go hungry all day. So think twice about binning stuff you don't like. The earth's resources can't stand this level of unnecessary food waste. TAKE NOTE, TESCO!). This product though, bought once and consumed, but will never buy again. It was yuk. Thanks for reading.

I am not happy, having to use the full packet at o

I am not happy, having to use the full packet at once because the slices are frozen together, and you have to defrost all of the slices, it is too much for one person, I will not be buying this product again,

Easy to use and great to eat!

I've been a vegetarian for over 30 years and, despite trying new brands of meat free bacon when they come out, I always return to Quorn's bacon as, for me, it's the best taste and is incredibly versatile as can be used in so many dishes and holds its shape when wrapped around veggie sausages etc. I'm confused by how many reviews are complaining about having to defrost it all at once or saying it's not suitable for single people as I'm a single person and never have any problem with the fact you have to defrost the whole packet as, after leaving it out to defrost and then putting in the fridge, it easily lasts for several days (sometimes even a week) as long as the plastic packaging inside the box is closed again between uses (I hold mine closed with an elastic band after folding the top over to keep the air out and then put back in the box and close it) but, to be honest, as it's so tasty and versatile, as can be used in main meals, fry ups, sandwiches etc, it's not hard to use 8 rashers within a few days, so none of it ever goes to waste. The only problem I have with it is trying to eat it before my cats do as they're all very keen on it and will fight me for it! haha.

As a veggie of over 35 years i have tried every bacon alternative including the new Richmond veggie bacon, but I think for taste and texture the quorn bacon is still the best.

Oh my god what can I say about these! Taste exactly like the real thing but without the fat. Cooks crispy.

Have to admit first impressions were not good. But I cooked the rashers ( a little over done admittedly ) and had my first vegan bacon sandwich and WOW. Absolutely delicious and would highly recommend

I agree with the review about not as good as Morning Star veggie bacon. Years ago when our Tesco stocked Morning Star I filled my freezer up every time I could get it, as supply was erratic to say the least . Then they stopped selling it completely. And all these years later I still haven't tasted a veggie bacon as good. Even Quorn or the Tesco own brand in the past are not a patch on it. Please somebody track down the recipe.

Taste great but have one flaw.

These taste absolutely delicious BUT they are all stuck together so you have to defrost all of them at once even just for one sandwich? and then they don't last as long? Totally ridiculous. There should be some separation, a thin sheet of baking parchment or something !?