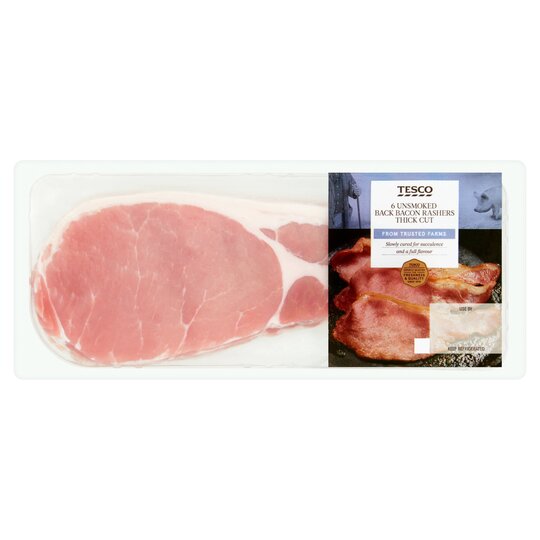 Suitable for home freezing. Ideally freeze as soon as possible after purchase but always by 'use by' date shown. Defrost thoroughly for a minimum of 8 hours in the fridge. Follow the preparation guidelines above. Once defrosted use on the same day and do not refreeze. Keep refrigerated. Once opened, consume within 3 days and by 'use by' date shown.

Made in the EU, using pork from the EU

I have received expired bacon.Got delivery eve 31st of March and bacon expired on 30th of March.

dreadful choices for deliverys we get the rubbish

Threw the last lot away it was dreadful..dont know who picked it to be delivered..the meat has been dreadful..i had to throw the beef joint I had a Christmas ..who is picking my meat

Really fatty - will be sending back

Really fatty - will be sending back

Please give me lean and not fatty thank you

Please give me lean and not fatty thank you

Horrible! i keep picking this stuff up by mistake! dont klnow why anyone would like Thick cut bacon.. just buy gammon lol

The bacon was very meaty but salty, plus it was le

The bacon was very meaty but salty, plus it was leathery, don`t know if it is the way I cook it, but other than that O.K.

Cut far too thickly and almost a chop. Is of poor

Cut far too thickly and almost a chop. Is of poor quality and lacks flavour. I will not buy it again - may try it in a much thinner cut.

Wafer thin bacon. So thin it is nearly impossible to take a slice out of the packet in one piece. Awful product

Not up to usual standard