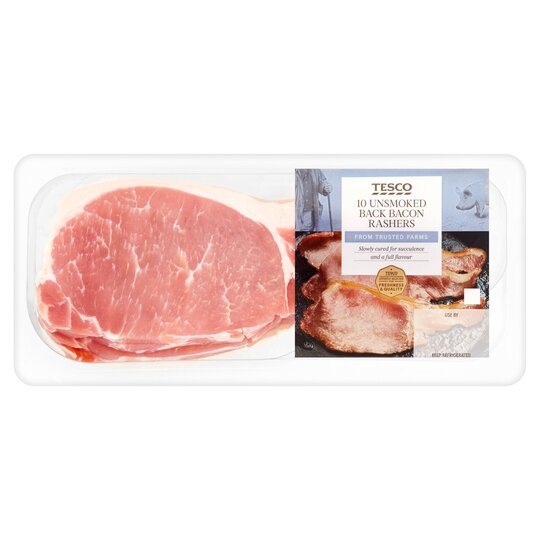 Suitable for home freezing. Ideally freeze as soon as possible after purchase but always by 'use by' date shown. Defrost thoroughly for a minimum of 8 hours in the refrigerator. Once defrosted use on the same day and do not refreeze Follow the preparation guidelines above. Not suitable for cooking from frozen. Keep refrigerated. Once opened, consume within 3 days and by 'use by' date shown.

Shallow Fry
Instructions: Heat 1 tsp of oil in a frying pan. Add the bacon and cook over a medium heat for 5-6 minutes, turning occasionally.

I buy this bacon regularly and its it's usually ok

I buy this bacon regularly and its it's usually ok but this week's pack which I received in my delivery was very very fatty, by the time I trimmed the fat I was left with a small medallion

There was so much fat on this bacon that I photographed it and sent it to Tesco. I am still awaiting a response. I'm not one to usually do this but the fat/bacon ratio was disgusting.

It was far too fatty

It was far too fatty

This bacon contained more water than the cup of tea that went with it, you end up boiling the bacon rather than frying it. Also so thin I could almost see through it. Would not recommend.

The back bacon was not what it looked like on the picture. It was very fatty even though I asked for it to be lean. It was more like middle cut to look at.

Delivered Sun 12 April, had to throw it out immediately as bacon was brown, meat definitely off! Think hadn’t been refrigerated properly. Have tried to complain to Tesco’s just get reply saying no one answering emails!

It is so thin - 2 rashers of bacon sliced paper thin into 10 (see-thru) rashers. It's a con - you cannot cook the stuff without it turning to crisps (that taste of fish guts)

My favourite and just the right thickness.

When I purchased this bacon last week, there were

When I purchased this bacon last week, there were less number of rashers and they were all very thick. We prefer them to be thinner.