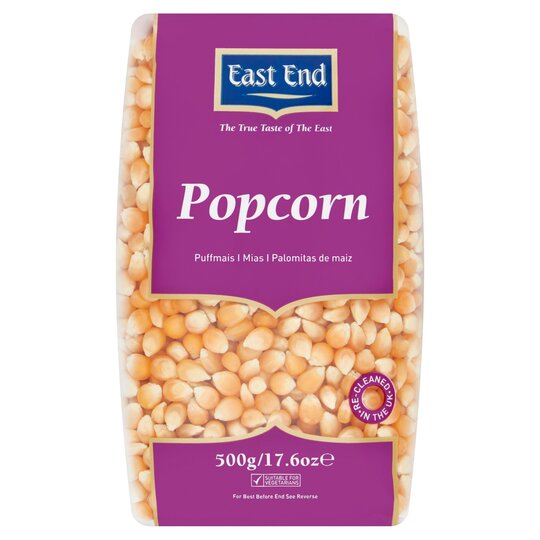 Once opened store contents in an airtight container under cool, dry conditions away from direct sunlight.

Hob
Instructions: 1. Heat 3 tbsp of corn oil in a large saucepan over a moderate heat. Sprinkle 1/2 cup of popcorn on the bottom of the pan. Immediately cover pan tightly.
2. Shake frequently to prevent corn from sticking and burning.
3. When popping sound subsides, pour popcorn into bowl, sprinkle with salt and stir in melted butter. As a delicious alternative add in a mixture of your favourite spices.

Foreign produce. Packed in the U.K.

DO NOT EAT RAW

Ridiculously easy to use. From pouring the oil into the saucepan, to sitting down with a bowl ready to eat, takes less time than an advert break ie less than 3 minutes. And SO much cheaper than ready made.

I love the popcorn

I like the quality of this popcorn. It makes me full for a long time. I pour one tbs of oil into a ceramic pot and let it heat up. Once the oil is hot pour in at least 3tbs of popcorn and put a lid on. Wait for 30 seconds and you will hear the popcorn POP, I tend to lift the lid and close at least twice so that its aired. Popcorn done all delicious. Yum Yum

this has been unavailable for 3 weeks -why?

Almost thought i would end with some burnt kernels

At first i said to myself, pop corn pops usually 5 minutes. How come the first reviewer wasnt able to get it to pop. Well i put butter/margarine on the pan and when nothing was happenning after 5 minutes. I quickly looked back to the packaging and it said to put some coconut oil, as i didnt have any coconut oil and only had the sunflower oil i tried it instead and then waited. After 25 more minutes of waiting after the coconut oil was in and it was already starting to smoke a bit, i finally got it to pop. I have to say its the first time ive ever seen popcorn take that long to pop. Where im from, you put butter , you put the corn, wait for the pan to heat around 3 minutes and you get popping.

I wanted to try making homemade popcorn as my wife and I had for the taste for it and realised that buying a big bag would work out much cheaper than getting the microwave types. I'd read a one star review for this popcorn so was a little concerned it might not work for me. And no one likes a failure in the kitchen, right? I searched the internet for a recipe and found one on a British Broadcasting organisation's food website. Coconut Oil they said was the key. I bought some of that from Tesco too, along with the East End popcorn kernels. 3tbsp coconut oil in a large pan with a lid. Put 4 or 5 kernels in the pan and heat the oil until the corns pop. Take the pan off the heat and add half a cup (measured) of corn. Swill the corn around in the pan and count to 30. This covers the corn in the oil and preheats it a bit. Put back on the heat. When the corn starts popping, shake the pan around to keep things moving. It'll go wild in the pan for a couple of minutes. It's fun to have a glass lid to watch it through. After a while the popping subsides to virtually nothing. Take the pan off the heat and tip the corn into a large bowl. The Tesco plastic mixing bowl from the cooking aisle is great. Add some butter to the hot pan and let it melt. Pour it over the popped corn and then tip it back into the pan. Lid on, shake it around to distribute the butter. Add some salt. Shake. Add some more to taste. Other toppings can be used, look around for ideas that you might like. We like butter and salt though. Five Stars. No hassle. Enjoy.

They're corn, but they don't pop

I tried everything (soaking overnight, increasing the temp), but I could still only get half of them to pop and not by much.