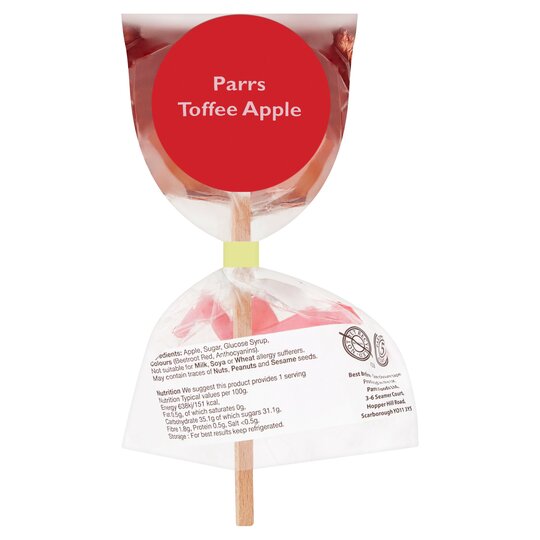 We suggest this product provides 1 serving

Impossible to eat. So hard that I didn’t know how

Impossible to eat. So hard that I didn’t know how to it that. Apple itself was mushy and unfresh. Quite disappointing.

My children couldn't bite into these at all. Even the grown-ups has problems, the toffee was rock hard and horribly sticky. The apple inside was soft and unappetising.

Poor quality apples all bruised etc and the hardest toffee that also sticks to your teeth. Very disappointing avoid.

They're one of the worst toffee apples I have ever

They're one of the worst toffee apples I have ever tasted, as others have said the toffee coating was far too hard and sticky, also the outer covering of the toffee apple very difficult to take off.

I really look forward to this time of year, as I LOVE toffee apples. I can't tell you how disappointed I was, it seems as if the toffee was mixed with concrete and super glue. Virtually impossible to bite into and then the toffee sticks to the teeth like glue. Last year's toffee apples from Tesco were great, don't know what has happened this year. I definitely won't be buying anymore :-(

Too hard and sticky

Like others have said the toffee is way too hard and stick making it inedible. Shame because the toffee is nice but we want to eat it not just lick it. Buy the Fosters ones instead.

toffee was so hard you could no even bite into it.

Literally the worst toffee apple I've ever had. The toffee was ridiculously hard and glued my teeth together, was practically inedible. What a shame.

Made from the hardest toffee ever invented!!!! It'

Made from the hardest toffee ever invented!!!! It's like concrete