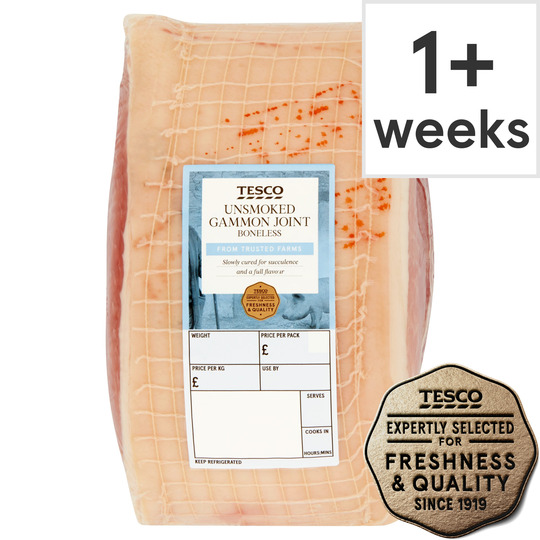 Suitable for home freezing. Ideally freeze as soon as possible after purchase but always by 'use by' date shown. Defrost thoroughly for a minimum of 24 hours in the refrigerator. Once defrosted use on the same day and do not refreeze. Follow the preparation guidelines above. Not suitable for cooking from frozen Keep refrigerated. Once opened, use within 2 days.

Instructions: 190°C/Fan 170°C/Gas 5 30 mins per 500g plus 30 mins Score surface to give crackling. Place joint in a roasting tin and wrap the exposed meat in foil ensuring the rind is left uncovered. Place onto the middle shelf of the oven and cook for 30 minutes per 500g plus 30 minutes. Remove from the oven and open up the foil for the last 20 minutes. Allow to rest for 30 minutes before carving for optimum meat succulence.

One third of this joint was a large lump of fat. Once removed remaining ham OK but very disappointed as end product very expensive when pricing cost of lean meat per kilo.

First and last time buying from Tesco, I usually buy from local butcher. I Soaked and boiled the ham before putting it in the oven, even though it did not say that on the packaging. Glazed with honey and it was still salty. When we cut it there was a lot of fat.

Excellent and good for cold meat after

Very disappointed in quality. I don’t usually order on line but choose my meat in store. The quality in store is far superior to what I received, in fact I threw a large portion of the joint away as unusable.

It was far too salty. I usually buy my gammon joints from my local butcher but he was closed for holidays so I thought I'd buy one with my Tesco order. I cooked it as I usually do, soaking it in fresh water for a full day, and then boiling it in fresh water with a few herbs, peppercorns and an onion. After two hours of boiling I take it out of the water, put a glaze on it and pop it in the oven for about half an hour to cook the glaze. The ones from my butcher are usually delicious and the cooking stock makes fabulous soup. This one from Tesco was so salty we could hardly eat it and I had to throw the cooking stock away.

It was quite fatty which was very disappointing

This was a great piece of gammon. I have cooked my own hams for years and have learnt along the way that you have to soak the joint for at least 24 hours possibly 36 hours. I know it's a pain but if you cook it direct from the packaging then it will be terribly salty as some of you have said. Also, they say cook it for 20 minutes per pound, this to me is way to quick. For a 2.6 kg gammon, I boil it very slowly, like a rolling boil for at least 4 hours. I put half sweet cider (still not fizzy) and half water with a whole bag of coriander and a couple of onions and it comes out really tasty and not salty at all. The other thing I do, is when it is cooked, take it out of the liquid and leave it covered with a tea towel until it has gone to a slightly hotter than warm temperature. It's lovely and tender with great juices. I hope this helps.