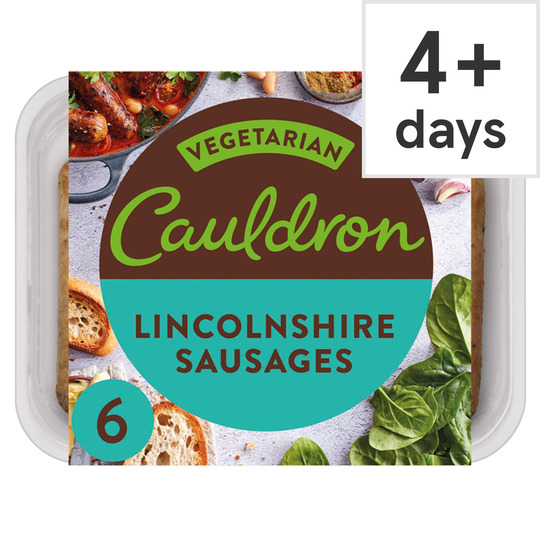 of the reference intake*
Typical values per 100g: Energy 758kJ

Keep refrigerated and eat by the date shown on the front of pack. Can be frozen on day of purchase for 1 month. Once opened must be eaten within 24 hours.Do not refreeze once thawed. Use by: see front of pack

Cooking Instructions
Instructions: Remove all packaging.
For best results cook on the Hob.
All appliances vary, these are guidelines only.
Check product is piping hot before serving.

Oven cook
Instructions: Preheat oven to 200°C/Fan 180°C/Gas 6.
Brush with a little oil. Place on a baking tray.
Cook on the middle shelf.

no vegan because they pointlessly add an egg!

These taste delicious, but does anybody know how to prevent the outside getting so tough when they're fried? They don't have skins as such, but they're very difficult to bite into.

Excellent! So why aren't they available? Heck fi

Excellent! So why aren't they available? Heck first the own brand frozen veggie sausages vanished. Now these. It may come as a shock but not all vegetarians like beetroot burgers. Plant based is all well and good but what about choice and taste?

The best veggie sausages ever. The right balance

The best veggie sausages ever. The right balance of herbs and spices. Not at all greasy when eaten cold unlike some veggie sausages. Would definitely recommend.

I'm trying to persuade my family to eat more vegetarian options but they weren't convinced by these sausages. At best, I'd hoped they'd taste a bit like stuffing, but they were quite firm and took a bit of chewing, and had a woolly texture which wasn't pleasant.

Surprisingly tasty alternative. Good strong herby an umami flavour. I roasted them which burnt the bottom a tad, but worst things can happen eh. Not as firm as meat, but many probably wouldn't even notice.

Fabulous sausage if they are in stock !

Tried these not as good meat version from tesco h

Tremendous veggie sausages that the family generally prefer to the real thing. Cook and brown very nicely and a hearty taste.

These are amazing. Have the taste and texture of r

These are amazing. Have the taste and texture of regular Lincolnshire's. If someone gave me these and said they were pork I'd have no reason not to believe them. Definitely recommend you give them a try.