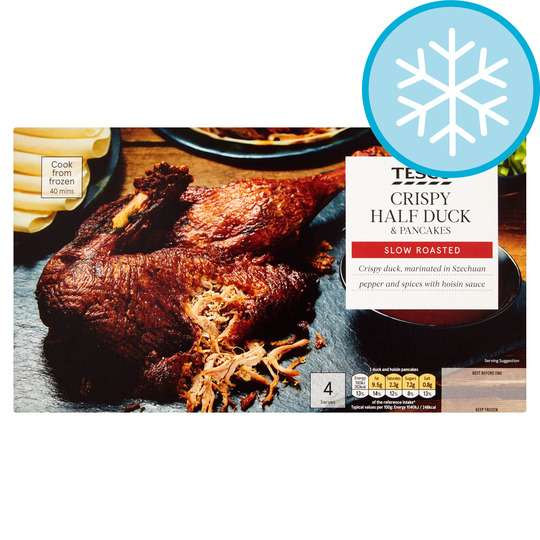 For best results cook from frozen. Important: If food has thawed, do not refreeze. Keep frozen at -18C or cooler.

Instructions: Oven Frozen: 220°C/Fan 200°C/Gas 7 35-40 mins For best results cook from frozen. Duck only. Remove all packaging from half duck. Place half duck on a baking tray in the centre of a pre-heated oven for 35-40 minutes. Duck not suitable for microwave cooking or steaming.

Steam
Instructions: Steam Frozen: 5-6 mins Pancakes only. Remove pancakes from bag. Place in a steamer or on a plate and cover with a piece of foil or saucepan lid. Steam over a pan of simmering water for 5-6 minutes. Pancakes not suitable for oven heating.

Quality OK but object to yet another reduction in size but not price! Be aware that every time Tesco (and other companies) temporarily removes a product from the shelf, it returns at the same price but smaller in size.

The worst crispy duck meal set I have ever tasted… tasteless duck and the hoisin sauce is all types of wrong and I was so looking forward to it….SO SO SO DISAPPOINTING!!

I've never left a review about anything before, but had to, after seeing all the negative reviews for this product. I LOVE crispy duck, used to work in Soho, and ate it at least weekly. This product is fantastic; admittedly, other supermarkets include cucumber and spring onion in their non-frozen ducks, but that doesn't really detract. It's also essentially a starter, so I tend to get all the pancakes filled, but you wouldn't be serving this up as a main course. (If you buy it with a view to feeding 4 people with nothing else, then yes, you'll probably be disappointed.) I buy this weekly from Tesco, and am never disappointed.

Disappointing, Meat was so tough with little flavour, certainly not enough for four people, I managed to get small amount of meat off but it was so fatty and not pleasant. Wouldn’t buy this again

It would have been helpful to know that it was a frozen item on the web site. My husband put it in the fridge and so we had to guess how to cook it. The sauce left a nasty taste in the mouth and looked a strange colour. All in all a waste of money. I’m not sure how you would get enough meat for 4 portions

Tesco should discontinue this item, it's awful

I bought 2 of these Tesco half crispy duck. The first one was awful as was the second. I suppose it's possible that I happened to get both halves of the same duck but it doesn't seem likely. The bird must have been very sickly and malnourished indeed. The resulting meat (what there wa of it) is tough (very hard to claw it off the bones) and not an ounce of flavour. I won't be buying it again. Treat yourself to a Gressingham half duck instead. It's more expensive but it's delicious and the VFM is beyond compare.

Teeny only managed to get a small amount of meat off. Rest was sinew, also dry as bone, skin vile, usually best bit! Smells of grease when cooking

Very disappointing ,dry, tasteless, with poor pancakes and only enough sauce for one person. Used to buy Cressingham Duck from Tesco. Now have to go to Sainsbury for it where it is cheaper than I was paying before.