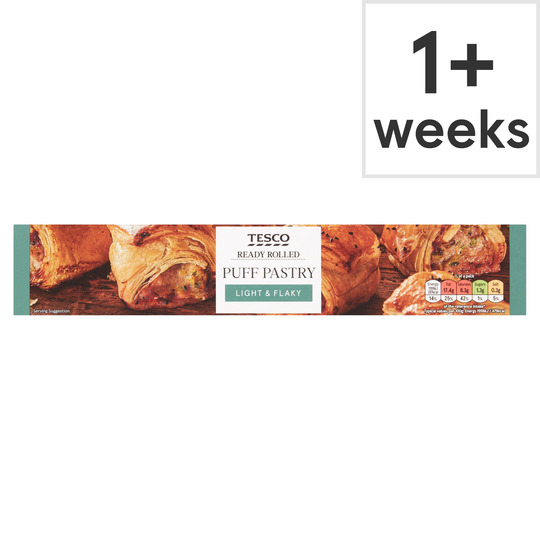 Suitable for home freezing. Ideally freeze as soon as possible after purchase but always by 'use by' date shown. Defrost thoroughly for a minimum of 12 hours in the refrigerator or for 2 hours at room temperature. Once defrosted use on the same day and do not refreeze. Follow the preparation guidelines adjacent. Not suitable for cooking from frozen. Keep refrigerated. Once opened, use within 3 days and by 'use by' date shown.

Instructions: 220°C/Fan 200°C/Gas 7 10-15 mins Remove from the refrigerator approximately 10-15 minutes before use. Unroll the pastry and leave on baking paper provided. Cut to required size. Place on baking tray on the middle shelf of pre-heated oven for 10-15 minutes or as stated in your recipe.

Would not come off the backing paper - bought three packs to make Turkey & leek pies for friends coming over. Hugely disappointed, it was just a sticky mess. Managed to get a couple of packs of Co-op's own brand from the local shop - it was much better. Do not buy!

Very very disappointed even before I've baked it. Trying to open the roll of pastry is a challenge in itself. It was to sticky to handle. One packet was just a soggy mess and stuck to the paper which tore. Opened immediately once out of the fridge one packet at a time. Never had this happen in the past.

My score is really NO stars!!!!

Wanted to give it no stars but wasn't allowed! Received as as substitute for Jus-roll, will be ticking the no substitutes box in future! Despite following instructions to the letter pastry would not come off backing paper consequently sausage rolls leaked, which they have never done before in my 60+ years of baking! This product is not fit for purpose!

Did the job for me and made perfect sausage rolls. No problem unrolling the pastry, cooked evenly and the end result was a tasty flaky sausage roll

Not as good as Jusroll

Not as good as Jusroll

doesn't come off the backing paper, useless unless

doesn't come off the backing paper, useless unless you want one large piece of pastry

Slimy paste that sticks to the paper - bad buy!

I haven't even baked it yet but I wish that I'd bought JusRoll instead of this. It sticks to the paper so it's virtually impossible to get off intact (making apple turnovers). I have had to try sealing the seams twice and it's now in the fridge as I'm trying to harden it up before baking. I'll try yet again to seal properly. I often make my own pastry but bought this to save time! I should have read the reviews first. Such a disappointment. I'll bake it and if necessary go out and buy pastries to use for other people!

Should have just made it all myself

I myself can not eat this has it as palm oil in it and it makes me ill so i made some puff pastry for me and used this for the others it did not puff up at all mine did and i treated them both the same . They said it tasted alright but it was like eating paper. Will just make it all if the one i buy for them is not in stock next time.

Poor quality product, sticks to paper and therefore virtually impossible to use.

To run contrary once again to the the negative reviews about this product,the buy of this product will be my 4th,and I can find no fault with it. The 'not as good as it used to be' brigade are rattling on as usual,but I have only recently started buying it and have no basis for comparison.It rises,it tastes nice,its inexpensive,and does the job perfectly well. I will continue to buy it.I might add that it compares favourably with the Jus Rol puff pastry that I always bought until deciding to try the Tesco version,and I have switched to this as its quite as good if not better and is cheaper.