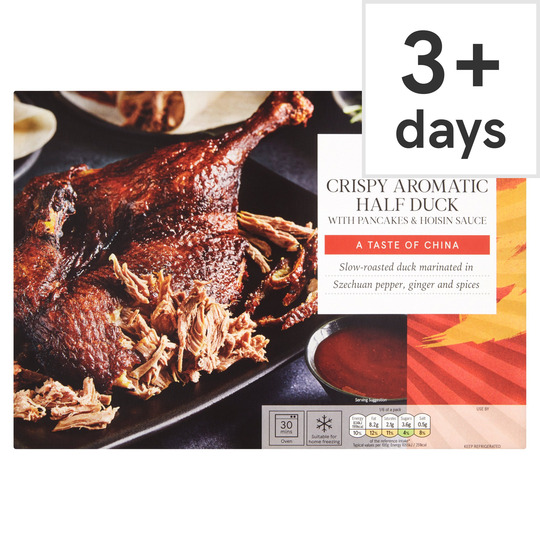 Clubcard Price
1/6 of a pack

Suitable for home freezing. Ideally freeze as soon as possible after purchase but always by 'use by' date shown. Follow the preparation guidelines above. Once defrosted use on the same day and do not refreeze. Defrost thoroughly for a minimum of 12 hours in the fridge. Keep refrigerated.

Instructions: Remove sleeve. Remove film, hoisin sauce and pancakes from tray. Duck - Oven Chilled: 220°C/ Fan 200°C/ Gas 7 25-30 mins Leave duck in the foil tray and place onto a baking tray in the centre of a pre-heated oven. Steam or microwave the pancakes.

Steam
Instructions: Pancakes: Steam Chilled: 6 mins Remove pancakes from packaging and place in a steamer or on a plate, cover with a lid or foil. Steam over a pan of simmering water. Serve immediately.

Caution: This product will contain bones.

This is probably the worst item I’ve ever bought i

This is probably the worst item I’ve ever bought in Tesco. It’s rubbish. Poor taste, small portions and completely tasteless. Do yourself a favour and buy something else. If I could give it 0 stars, I would

Too many pancakes for the amount of meat Enough for 2 people or 3 at most. Duck wasn't too bad, cooked for longer than said on packet to get some crispy skin. Hoisin sauce was not the best but ok.

Very nice indeed, far better than the frozen version. A word of warning, it says 6 portions and this clearly means as a starter at best, anyone who has ever ordered 1/2 a crispy duck before will be aware of this but someone trying for the first time may be caught out. Finally don't forget the spring onions and cucumber (why are these not included in a chilled product?)

This is poor, Certainly not enough for six people like it says, I could just about get two small portions of meat off the bone, even then the meat was tough and not pleasant. Hoisin sauce was dreadful watery and had horrible chemical taste to it, couldn’t eat it. Please don’t waste your money.

Just awful. The duck was tough, stringy and inedible. Not enough duck for the number of pancakes supplied. Even the hoisin sauce was terrible. Do not buy!

Meat was rather tough

The duck was tough chewy and bland. The sauce didn't taste of much either and there wasn't enough of it. There was only enough duck to make half the pancakes, and that was using it sparingly. Certainly wouldn't buy this again.

Duck out of this one

Apparently the pack says '6 portions'. Really? It barely went between two. Cooked as per recommendations but a very sparce half duck, so some meat was dry and stringy, not like the same product Tesco used to do. Disappointed and won't bother again.

I ordered this with some trepidation having read poor reviews. I normally get my duck from M & S but during lockdown am unwilling to go there. I was not disappointed! If you cook the duck following the instructions i.e. on the high-ish temp and for the maximum length of time or even for a few minutes more, it is excellent - crispy and tasty. We didn’t need all of the pancakes. As one reviewer pointed out there is no cucumber or spring onions - we added our own.

The duck is ok and the pancakes but the sauce is terrible and there isn't and spring onion or cucumber.