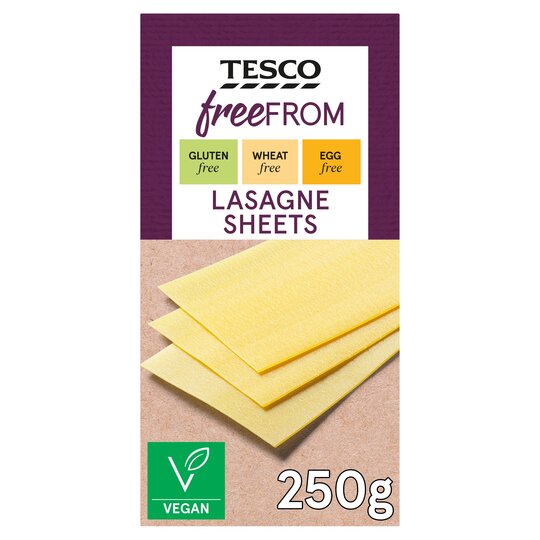 2%of the reference intake
Saturates
0.4g

2%of the reference intake
Sugars
0.3g

1%of the reference intake

Instructions: 180°C/Fan 160°C/Gas 4 35-40 mins For best results oven cook. It is not necessary to pre-cook lasagne pasta. Pre-heat oven. Place a thin layer of your choice of sauce and then arrange a layer of lasagne sheets on top. Alternate layers of the sauce and lasagne sheets covering the last layer with a white sauce. Sprinkle with cheese and place in the oven for 35-40 minutes until brown.

Takes a bit of preparation but tastes good

Used this to make a vegetable lasagne. After reading the reviews I blanched for 5 mins until soft (just a couple of sheets at a time though as they will stick together!) and then left the lasagne to stand for 30 mins before cooking. Came out well cooked and tasted good - would definitely use them again.

Reading the reviews I was wary of ordering - but I found these lasagne sheets excellent. I prepared a Chard & Mushroom lasagne (not overly wet) and left it to soak for an hour prior to cooking. The results were better than ordinary lasagne sheets. I am sure a meat lasagne, with cheese sauce, would come out just as good.

Don't expect them to cook!

Really disappointing. My lasagne came out all but raw, after about 70 minutes' cooking. The instructions say the sheets don't need pre-cooking, and take 35-40 minutes: the only way they would cook in that time would be if your sauce was basically just liquid. I ended up scraping my mince and sauce off the uncooked sheets and serving it with some other penne that I cooked separately. Can not recommend.

Doesn't cook well. After 45 minutes and having been blanched, it was still hard!

Really nice lasagne sheets. They cook well and to

Great alternative to normal lasagne sheets. Yes they are a little more tough than normal but unless you’re trying to cut it with a spoon the you won’t have an issue at all. Taste fine and cook fine so not sure why there are so many negative reviews. Too many Karen’s who just want to speak to the manager.

Was very hard and although it says on the packet that it doesn't need cooking - that would definitely have made it better! Wouldn't buy again I'm afraid as it spoilt the overall dish.

I was looking for a free from version and came acr

I was looking for a free from version and came across this. After reading the reviews, I was skeptic but I cooked the lasagne sheets for 45 minutes on 220 without pre-cooking or blanching and they were cooked to perfection. I did try to blanche but the sheets ended up just sticking together so I just didn’t bother the next time.

As others have said, it just doesn't cook. Added e

As others have said, it just doesn't cook. Added extra moisture, cooked for longer than instructions and it was hard as nails. Won't buy again

Cooked it for 45 minutes following the instructions,including lots of liquid.The lasagne was so tough I could barely cut it ,let alone chew it. Like the previous reviewer said like rubber. I wouldn't buy this again.