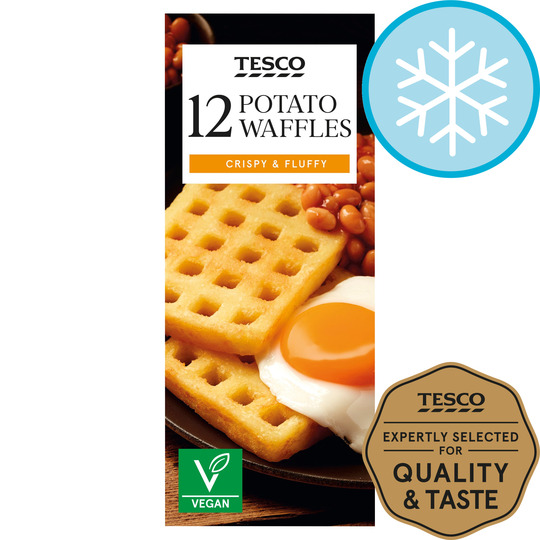 6%of the reference intake
Saturates
0.5g

3%of the reference intake
Sugars
0.3g

Instructions: Temperature: 220, 200, 7
Time: 15 mins
For best results oven cook from frozen. Oven From Frozen Instructions. 220°C/ Fan 200°C/ Gas 7 15 minutes. Place waffles flat, in a single layer, on a baking tray and cook in the centre of a pre-heated oven. Turn halfway through cooking time. Cook to a golden yellow colour and do not overcook. Do not exceed stated cooking temperature or time. When preparing smaller portions, reduce cooking time to avoid excess browning.

Grill
Instructions: Frozen 8-10 mins Place waffles in a single layer, on a baking tray and cook under a pre-heated grill. Turn halfway through cooking time. Cook to a golden yellow colour and do not overcook. Do not exceed stated cooking temperature or time. When preparing smaller portions, reduce cooking time to avoid excess browning.

Caution: Do not eat raw.

As good as the big brand, cook longer for crispier

I enjoy them and they are as good as any other brand of potato waffle. If they’re not crispy enough for your taste simply cook them longer. If using an air fryer flip them over half way to get them crispy all over. Great with beans, beans and cheese, macaroni cheese, spaghetti hoops, HP or tomato sauce. Makes a great finger with beans and an egg either fried or poached. Never had an issue with them, bough a packet just yesterday again.

Won't be buying these again

With the cost of living crisis I have been buying a lot of Tesco own brand items which generally have been excellent. The exception is with these Waffles which are awful. Despite cooking them for the recommended amount of time they were still a pale colour and tasted dreadful. I ended up throwing the rest of the packet out and will certainly not be buying them again as I would rather pay extra for something tasting nice to eat.

Misshapen and broken not good at all

Do not cook in a toaster

I expected that they could be cooked in a toaster like the other branded type. But the sunflower oil has come out while toasting and ruined our toaster.

Buy these regularly. Have never had a problem with

Buy these regularly. Have never had a problem with them not going golden and crispy. I put them on the top shelf for about 20mins in the oven. They may be a tiny bit thinner than Bird's Eye but they taste good.

Greasy and not very crispy.

Greasy and not very crispy.

very dry and not nice compared to leading brand, and the taste was not good according to the kids! Wouldn't buy again

Poor substitute, not much diff in price either

I don't usually leave reviews but I found these so poor, I had to. Thinner than Bird's-eye and don't cook right, tried them in the oven and grill and wouldn't turn golden, stayed really pale, the longer you cook them..to get the 'cooked look, they just over cook, still with no colour, but turns it like there's no potato inside, I was trying to cut down on shop spends, but in future I'll just purchase bird's-eye when they're on offer, I'm thinking of binning these and I never bin food !

I really like these, prefer them to other brands but last two packs had only 10 waffles each. If they are now 10 in a box the box should state it.

I find these nicer than others and like to get them nice and brown and crunchy on the outside and there's still a nice fluffy potato on the inside. Very good value for money.