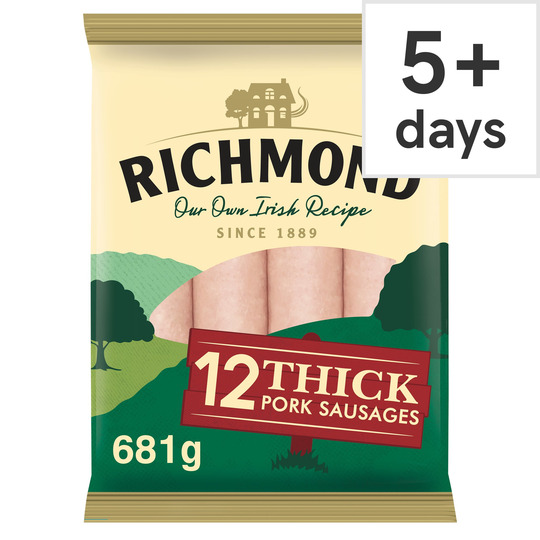 of the reference intake*
Typical values per 100g: Energy 1123kJ/

Keep refrigerated below 5°C.Suitable for freezing. Freeze no later than 2 days before Use By date and use within 1 month. Defrost thoroughly before use. Do not refreeze once defrosted.

Cooking Instructions
Instructions: Remove all packaging.
Check that they're cooked all the way through... smiles guaranteed!

Oven cook
Instructions: 20-25 min
Preheat oven to 190°C/Gas Mark 5. Place sausages on a baking tray in the middle of the oven and cook. Turn occasionally.

I cant believe that these are supposed to be the nations favorite!, considering 42% meat content, which is one of the lowest on the market, even the supermarket "value" brands have more, and its at a premium price, so even worse value, the skins have artificially got a coating to make them Brown and the taste is nothing special. Overpriced poor quality

We have tried all sorts of sausages and still go back to Richmond.

worst sausages i've ever had

worst sausages i've ever had it didn't start well when upon opening the packet I saw they were an unnatural, quite weird pink colour. the texture was soft and putty-like, like the meat slurry you see being made for chicken nuggets. after cooking the skin was nice and crispy but that pink meat shake quality persisted, yielding no bite, only a soft unsatisfying mush. i know saudages are made up of all sorts of off cuts and bits and bobs but at least try to provide a texture that hints at the source being solid animal proteins. They were also very fatty and had little flavour other than that cloying after taste of cheap white fat. Tesco's own finest brand are much better

Only 42% meat content, texture of mush, not firm o

Only 42% meat content, texture of mush, not firm or meaty. Low quality sausage at premium sausage prices. This is what heavy advertising can do for a brand! Some people give them a good rating probably because it reminds them of their childhood, but not because of the sausage itself, which is no better than the cheapest sausage found in any supermarket. I won't be falling for the nostalgia again. These really are as bad as I remember. Yuk!