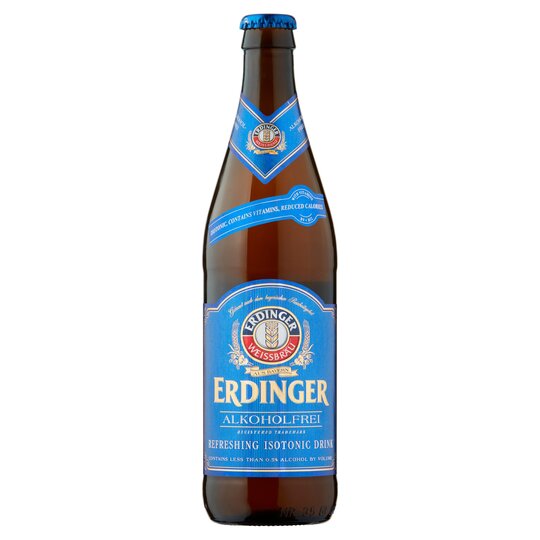 It's ok if you have to avoid alcohol. It looks like weissbier, good head and even a little cloudy. Flavour is not unpleasant but don't get carried away and expect it to taste like normal weissbiers; and trust me, I've had a few over the last 50 years.

Unbelievably good. Have tried most on market and it is without doubt the best. Good lager flavour, not like a wheat beer, no unpleasant chemical aftertaste , terrific!

I have needed to stop drinking alcohol because of medical conditions. I have bought and tasted several AFR brands but at best most were weak in body and insipid in flavour. That is until I tasted Erdinger Alkoholfrei!!! The flavour and zing lasts throughout the drinking experience as does the head. For me it is just like drinking a normal alcoholic wheat beer. Well done Erdinger!!!

Very enjoyable beer when I had to give up alcohol for a while due to medication. I shall continue to drink it when I'm off the meds, if I am having to drive, as , surprisingly, it is a good substitute for Proper Job!

Best Alcohol Free Beer on the Market, Bar None!

The only alcohol free beer that tastes anything like a real beer. Probably more like a pilsner than a wheat beer to be honest, but still great for a virtually alcohol free brew. Hope more bars start stocking it soon, as it is way better than the usual Becks Blue or Heineken 0.0 that gets sold in pubs, bars and restaurants. Until I found this I'd most enjoyed Ghost Ship AF, but while the best of the rest is way behind this.

As a lager drinker I have never found anything like a decent af drink until now. Good taste, hint of sparkle, will be buying again

Refreshing drink from the fridge

I love this as a drink and don't miss the alcohol. Like everything else is a matter of taste and I had never tried the alcoholic version but this is so nice I will just stick to this.

Nothing to be said in its favour.

One star is given only because a zero star is not available. This is shockingly bad. Bought under the misapprehension it was a low-alc wheat beer only to find it is an "isotonic drink". Is the label deliberately similar to that of their wheat beer? I am amazed that it has got such good reviews ...

This is a refreshing, though gassy, low-alcohol weissbier that I learned of through a newspaper article about drinking beer to aid recovery from exercise. It is so gassy that I can usually only drink one post-workout (or at any time!), but it tastes alright and does not dehydrate. Unlike other low-alcohol beers, this one advertises itself as being isotonic, which is one reason I keep going back to it rather than buy something like Heineken Zero.