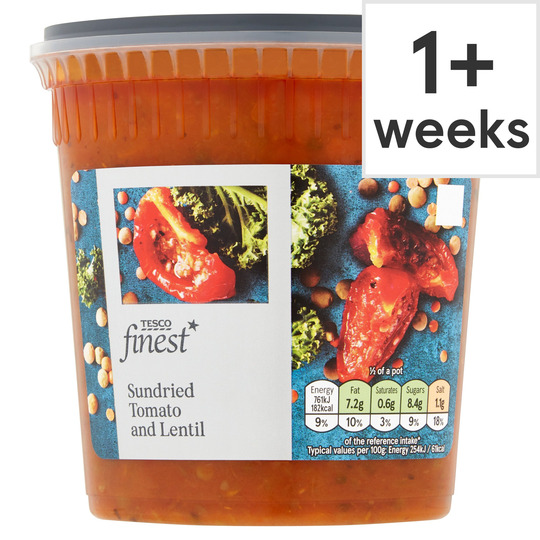 Not suitable for home freezing. Keep refrigerated. Once opened, consume within 2 days and by 'use by' date shown.

Instructions: For best results microwave heat. To open, pull tab on rim to break.
MICROWAVE 800W 5 mins/900W 4 mins.
Remove lid, stir soup, place lid loosely back onto the pot and place pot on a microwaveable plate.
Heat on full power and stir halfway through heating.
Stir and leave to stand for 2 minutes after heating.

Hob
Instructions: 5-6 mins
Empty contents into a saucepan.
Heat gently, stirring occasionally, until piping hot.
Do not allow to boil.

Take care when removing and pouring as product will be hot.

This is a tasty soup but it is being filled with very tough pieces of kale. A little is fine but it feels as if a cheap ingredient is being used in place of the more expensive ones to bulk the soup out. Tough green leaf and stalk is not nice to chew on!

Watery flavourless soup. Couldn't have been more disappointed in this.

Horrible. Tastes predominantly of carrots. Not sure where the sundried tomatoes were...plenty of big cubes of carrot, and lots of green lentils, both very undercooked. Nasty pieces of cabbage also present. Yuk Not pleasant in the mouth either texture or flavour wise. Give this a miss!

Would definitely recommend. One of the best soups I’ve ever had. Very flavoursome.

Cumin soup with a side of cumin

Sadly, this soup should be called Cumin and Cumin soup. The idea of tomato and lentil seemed promising until I tried it and all I could taste was cumin! I literally could not make out any other flavours. The annoying thing is that it’s not even listed an ingredient but the unmistakable flavour of it is overpowering. It must be an ingredient. It might have been nice if something else had been used, like basil for example. The Chicken Mulligatawny soup also tastes of cumin as does the Spicy Parsnip so it might have been nice if this one didn’t.

Watery and flavourless. Kale should have been chop

Watery and flavourless. Kale should have been chopped more or blended. Not worth the money!

A SOUP IN PROGRESS

First tasting a bit grim. Clearly a diabetic recipe. Aside from the obvious question of what KALE is doing in tomato soup (!) the main problem we had was the overpowering taste of red pepper - fresh, powdered AND concentrated - now, if you called it pepper soup that would make more sense... but all was not lost; the texture was fine, so we added a squirt of ketchup, some sugar and salt, white wine, quite a lot of fresh cream and a tin of cheap tomato soup (Tesco, of course) and voila! Edible soup! In fact it was a big hit and I've been asked to get it again! Now why can't Tesco's expert chefs do this?

Very disappointing. For all the reported ingredients it tastes of pretty much nothing. Just a weak gravy really.

Kudos to the Tesco Chefs

You like tomatoes, you like veg and you want to eat well, so what's not to like? Hot, hearty and nutritious!! Value for money, economical ( you don't have to use all of it at the same time) and delicious with a good chunk of bread. One of the best if not the best soup on the market!!

It's funny when you read the reviews and see how some people think it's bland while others find it too spicy :). Maybe they tried different batches? I think it is very flavoursome, full of veggie chunks, kale and I even found half a red pepper inside (no skin!). I'll buy it again!