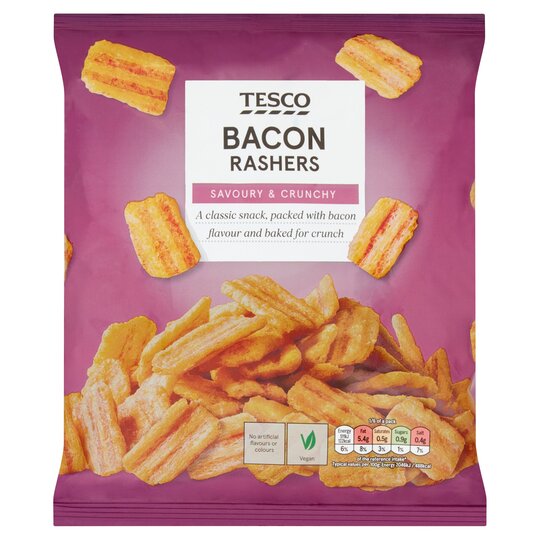 What's happened? These crisps SMELL AWFUL suddenly. Washed my hands 5 times after eating a pack and still cant get the smell off them. I hope I have a rogue bag and this is not a recipe change or I won't be buying them anymore.

AVOID!!! If I could leave zero-stars I would’ve done - they’re truly awful, they stink, & are totally inedible. God knows what makes a bag of crisps smell so bad, but wow they reek! This isn’t the first time neither so I’m avoiding from here on; It’s not fair that a consumer play crisp-lottery as to whether they taste or smell OK.

Used to be my favourite crisps but now they've added wheat to them I can no longer eat them (coeliac problems) absolutely gutted.

These taste just ok, but smell horrible when leaving the packet open. The fake bacon flavour is just not great.

Tesco what have you done. They are now disgusting. Why change the recipe when what you had worked. I bought two packets yesterday and they tasted burnt, thin, hard crisps with a very small amount of bacon flavour.

Disastrous change of recipe and/or manufacturer. The taste has disappeared - and these are like deep fried cardboard.

There's something really great about Tesco brand crisps like these. Cheaper stuff usually tastes nowhere near as good, but that's from the case with these crisps.

Lacking in any bacon flavour

This was the first time I purchased this product and I have to say they tasted nothing like bacon rashers. Given that the packaging states ‘packed with bacon flavour’, they are so bland and lacking in flavour. I will not be buying this product again. So so disappointing.

These used to be my favourite crisps but now they

These used to be my favourite crisps but now they taste of nothing -- no "bacon" flavouring at all. Now they just taste of maize. Terrible.