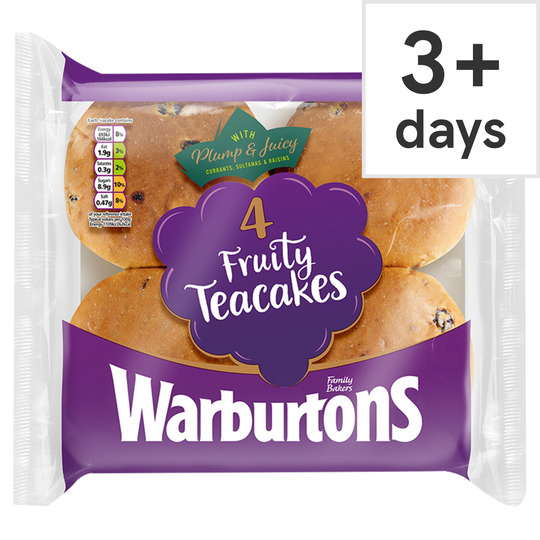 of the reference intake*
Typical values per 100g: Energy 1109kJ

Store in a cool dry place, ideally not refrigerated.Under warm conditions storage life will be reduced. If freezing, freeze as soon as possible. For 'Best Before' date see film.

Although every care has been taken to remove fruit pips and stalks, some may remain.

These are very yummy toasted with marmite on. They

These are very yummy toasted with marmite on. They keep well in the freezer and are always good.

Perfect in every way

Just the right size and with exactly the right amount of fruit, unlike so many of the 'super fruity' teacakes which have far too much and are so much too sweet. Lovely texture and toast beautifully.

What a joke. Half the circumference, half the dept

What a joke. Half the circumference, half the depth. Who do you think you're trying to kid. Used to love them. Now you're ruined them. Well done.

I would rather Warburtons had put up to price rather than reducing the size of the tea cake, also there aren't as many currants as there used to be.

Where is the fruit in these teacakes?

Warburtons idea of fruit is one or two sultanas per teacake. They are tasteless and you'd be better off just toasting and buttering some nice bread!

Unlike other reviewers, I like the fact that these are a bit lighter and fluffier than other tea cakes and I think the fruit to dough ratio is good- enough without being laden with sultanas. Also, they’re not too sugary, which other tea cakes almost always are.

Dreadful,they crumble to dust and taste like it too!

Too fluffy and not enough fruit

These are too fluffy ad not enough fruit and only four to a pack. What has happened to Tesco's own brand?