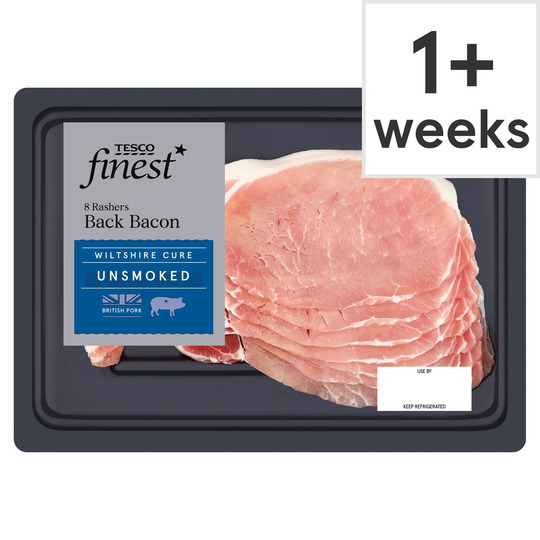 Suitable for home freezing. Ideally freeze as soon as possible after purchase but always by 'use by' date shown. Not suitable for cooking from frozen. Follow the preparation guidelines above. Once defrosted use on the same day and do not refreeze. Defrost thoroughly for a minimum of 6-8 hours in the fridge. Keep refrigerated. Once opened, consume within 3 days and by 'use by' date shown.

Produced in the U.K., using pork from the U.K.

Sorry, Tesco (it's a rare occasion when I have not been satisfied with a product). However, this is NOT what's expected of "Finest" and "Wiltshire Cured". This bacon is V ERY salty, and has the cheap taste of cheap bacon; what a disappointment!. Foolishly I bought this item again today, when I'd had the same negative experience last time I bought it.

Absolutely tasteless, nothing more to say really. Will not buy again.

Just an awful taste. 3 of us tried it and we all threw our sandwiches away.

Prefer the dry cure but this comes close

Blooming awful stuff, it's cut so thin it's diffic

Blooming awful stuff, it's cut so thin it's difficult to separate and there's so much fat running through it it's more like a broad streaky than back bacon. I only get it when it is substituted for the bacon I order and, as we're shielding and can't get to shop ourselves, I have to accept it or do without for a week!

The rashers in this bacon get thinner and thinner

The rashers in this bacon get thinner and thinner and also the last batch was very salty.

Looks amazing in the packet but once you start cooking the problems start. I fried this bacon and it released the most water of any bacon I've bought for a long time from other shops also, secondly it's the most salty bacon I've ever tried, not sure if this was a 'rogue' batch but it's so salty it's almost inedible and this from an unsmoked bacon which tends to be less salty than the smoked version! Sort it out Tesco this could be amazing bacon.

Very very salty couldn't eat it won't be buying again, total waste as I threw it in the bin.

The quality of this bacon is inconsistent. Previously have ordered it, and it has been lean and tasty with little fat. However, on the last couple of occasions, have found that it resembled Collar Bacon and was very fatty. Also found it to be very salty - unfortunately I had to complain to Customer Services and won't re-order.