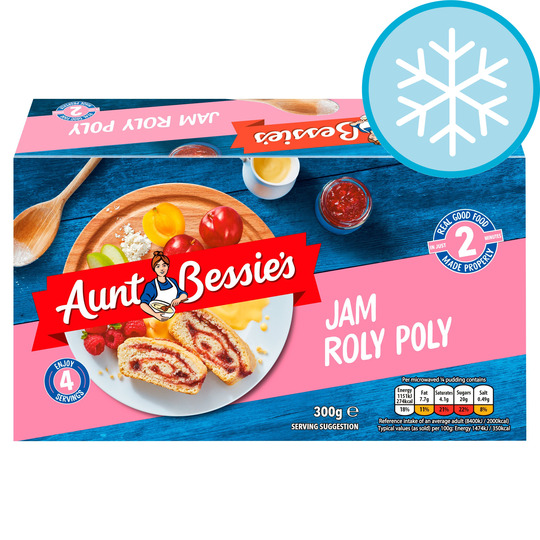 Keep me frozenStore in a freezer at -18°C or colder. Do not refreeze once defrosted.

Cooking Instructions
Instructions: Once defrosted do not refreeze. All cooking appliances vary, the following is a guideline. Take care - jam will be very hot once cooked.

Oven cook
Instructions: Conventional Oven: Preheat oven to 180°C/350°F/Gas 4 35-40 Mins
Preheat oven. Remove pudding from outer box, keeping it in its container. Cover with foil and place on a baking tray in the middle of the oven. Cook for 35 - 40 minutes. Spoon into portions or turn out onto a place and serve. Serve immediately. For fan assisted and miniatures ovens, refer to manufacturer's handbook for guidelines.

Was so looking forward to this, however it looked dried up when opened packet and didn't get any better once cooked, only redeeming factor was to smother it in custard. Would not recommend.

Stodgy and dry with barely any jam also very doughy, needs loads of custard to even make it edible 🤢

This is a nice roly poly for quickness rather than

This is a nice roly poly for quickness rather than making one. However, I really don’t understand reviewers who obviously don’t bother to read the descriptions and then complain. Two people have said they wanted sponge, but it clearly states it is a suet pastry roly poly, so if you want sponge, don’t buy this.

Can this be cooked in the Microwave or not? The p

Can this be cooked in the Microwave or not? The product description and cooking instructions are contradictory.

A jam rlly poly, should be soft sponge, rolled with jam. This was flat crispy something with a hint of jam. Never have I tasted or tried to eat that was so very far from what it should have been.

This has to be the worst pudding I have ever taste

This has to be the worst pudding I have ever tasted. It does not deserve to be associated with the Aunt Bessie's Label. I have used this brand for years and have been perfectly happy with their other products.

It was a good jam roly poly

It was a good jam roly poly

Did not like the taste or texture of this

Love it but portion size inconvenient

Really like this traditional roly poly but it would be much better if it could be separated into four individual portions in the box as many people don't want to use a whole one.

Quality poor the sponge was like pastry and it was very dry with little jam in it. I preferred Tesco's own or Morrison's own.