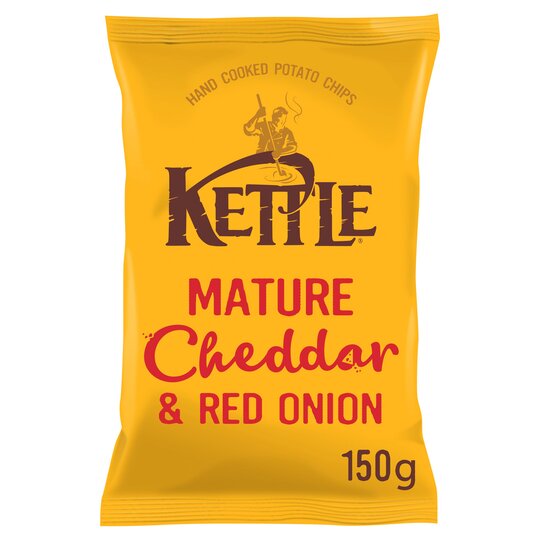 The panel below helps you to choose the balance that's right for you. Enjoy!,Each 30g serving contains:

Store in a cool dry place away from bright light.

This pack contains 5 servings of 30g

New recipe is a disaster

Would rate zero if I could. The new flavour is bizarre, it tastes like bananas to me. Much preferred the original recipe where you could taste real ingredients, ie cheese and onion. This new flavour has a synthetic taste so I will not be buying again.

These mature cheddar and red onion kettle crisps used to be the best crisps around bar none really moorish I could eat pack after pack they were so nice.I used to search the internet as they sold out so fast but the new recipe is absolutely disgusting with a capital D and as someone said if it ain't broke don't fix it.I've even been on to the makers of the crisps who claimed the people who conducted the taste study loved them well I can assure you they didn't ask me.I haven't touched a pack of the cheddar and red onion kettle crisps for about a year now and won't again unless they revert back to the original flavour I like the balsamic vinegar kettle crisps and a few other flavours so I'll stick to them unless they ever change back to the original flavour my advice is just don't bother with these they're awful not worth the money.

Delicious and excellent value when at half price.

Deliciously strong flavour and lovely crisp texture. I would have given them 5 stars but I think they are too expensive at their normal full price and never buy them when they are. However, they are excellent value when they are reduced to half price and I stock up then!

No longer 'cheesy' (or 'oniony' for that matter!). Quite salty and why oh why do they have sugar in them. Disgusting!

These used to be great crisps, they tasted both cheesy and with a hint of red onion. Awhile ago they changed the recipe and they became inedible, I have no idea what the taste is but it just tastes like burnt chemicals. tried them again recently and they're a bit more edible but still an awful flavour, if you like crisps with actual cheese flavour, avoid as these are disgusting.

The Original was the best.

It's true, the recipe has been changed again and as a result opening the bag is a smelly experience. "Voted cheesiest taste"? by whom? I'll vote them "Cheesiest smell!" Amongst other different ingredients, sugar has now been added. The bottom line is I will still buy them but for me the original no added sugar crisp was the best.

I used to love these crisps. The flavour was just right without being too overpowering. I recently bought some as they were on offer. It said on the bag that this was a new recipe and they were voted cheesiest taste.It didn't state who voted them cheesiest taste, so I suppose it could be their own employees for all we know. Anyway, I opened the bag and, OMG, the smell was like 'vomit'. I had to pour some into a seperate bowl and reseal the bag. I wouldn't say that I noticed much difference in the new recipe, but I'm sure this will be the last bag I ever buy. I do believe in the old saying - if it's not broke, why fix it. In my opinion, Kettle's should have left well alone!

Great flavour, very cheesy, could eat a lot of these...

Nothing compared to what they used to be :-(

When I started eating Kettles about 20 years ago they were the most delicious crisps you could get. They've changed the 'recipe' several times since then, and each time they've NOT been as nice as before. After this latest change, I find them tasteless, I looked online and discovered that the company was sold (or 'financed' in return for the company) in 2006 ( I think)), and it's been sold on several times since then. SO THAT explains why the recipe keeps changing. This latest recipe has actually added SUGAR to what is SUPPOSED to be a savoury snack! My distinct impression is that they are trying to 'trick' your taste buds into thinking they're nice, using various tactics (including the sugar). For them, this may reduce the cost of making them slightly - but that's extra profit, right?! I'm sure that if they JUST used normal ingredients, as was done by the ORIGINAL company, they would taste REALLY nice again! I've stopped buying these now, and they've been my favourite crisps for about 20 years :-(