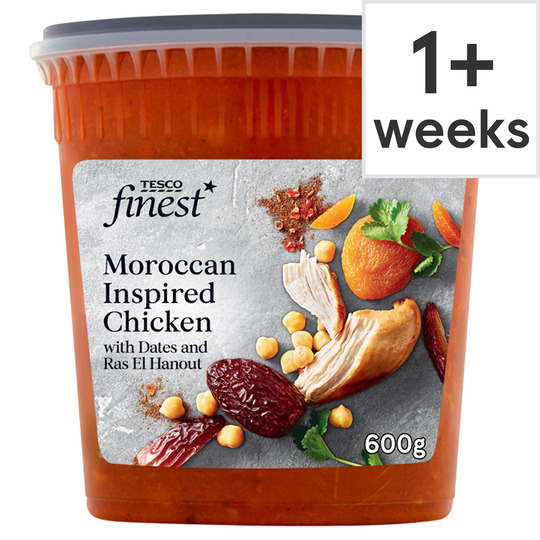 5%of the reference intake
Saturates
0.6g

3%of the reference intake
Sugars
12.6g

15%of the reference intake

Instructions: For best results microwave heat. To open, pull tab on rim to break.
800W 5 mins 30 secs/900W 4 mins 30 secs
Remove lid, stir soup, place lid loosely back onto the pot and place pot on a microwaveable plate.
Heat on full power and stir halfway through heating.
Stir and leave to stand for 2 minutes after heating.

Instructions: To open, pull tab on rim to break.
800W 12 mins 30 secs/900W 11 mins 30 secs
Remove lid, stir soup, place loosely back onto the pot and place pot on a microwaveable plate.
Heat on full power and stir halfway through heating.
Stir and leave to stand for 2 minutes after heating.

Delicious. Really hit the spot for me. If you don't like spicy food (and this isn't that spicy), probably best not to order something that is 'Moroccan Inspired'...

A stew masquerading as a 'soup'. Tesco are trying too hard with this and it is full of fennel seeds. Far too spicy. Will not touch again.

Tesco’s Finest* - I think not

Mouthfuls of grit and pungent sour taste of cardamon, awful recipe. Best described as ingesting a shattered bottle of aftershave. If I could give it no stars I would.

Should be called ‘no chicken’ soup

Flavour is great but it should be called chickpea soup, not chicken - I have had this several times now and the most chicken I had was 3 small chunks. Being a finest soup I would expect a much higher chicken content. Disappointing.

I dont usually write food reviews as everyone has

I dont usually write food reviews as everyone has their own taste, however this soup was vile. No flavour of anything other than overpowering spice. Overpowering fennel and heat, whole peppercorns unnecessary and too many gritty corriander seeds that I tried to pick out. I think tescos choice of soups this year are poor.

Too many pieces of coarsely ground peppercorns!

Well this soup had a warmth about it with a hint of Moroccan flavour, but I wouldn’t rush to buy it again! The chicken was almost non existent (I think I found three very small pieces in the pot) and the peppercorns were in far too large crunchy pieces, as though they hadn’t been ground enough. I wouldn’t want to recommend it unfortunately.

Used to be my favourite soup, lovely fruity flavour and could taste dates. now so spicy , no other taste and worse still ,every bite had 1 or 2 WHOLE ,crunchy peppercorns. Disgusting Please bring back the original recipe or I will be shopping elsewhere.

This USED to be a lovely soup. I hadn’t had it for

This USED to be a lovely soup. I hadn’t had it for ages, and really thought that the negative reviews must be wrong - but they weren’t! Barely any chicken, any fruitiness has been replaced with heat, and full of gritty pieces of spice, some of which are quite big. Definitely won’t be buying again.

It was really hot and spicy but I love food like this so it wasn't am issue for me. It has loads od chick peas in which I'm not usually keen on but they were delicious and great big chunks of chicken