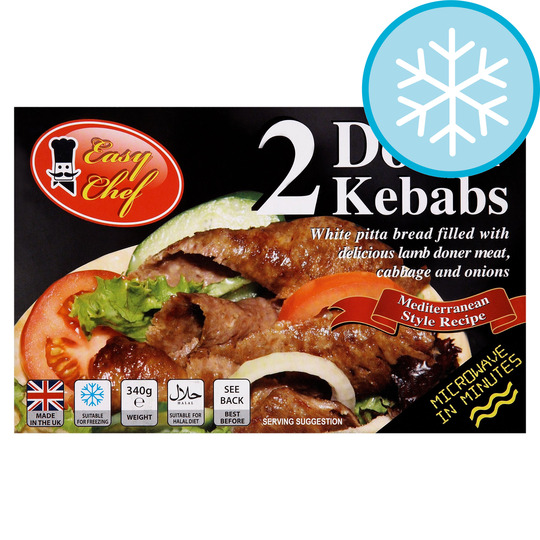 These kebabs get a thumbs up from me

Tried quite a few different kebabs over the years and these are by far the best up to now, I have chilli sauce so it's not a problem for me that they don't come with any

Really enjoyed these, nice taste. Not quite the experience of the kebab shop but to have something in the freezer that microwaves in 2 minutes is very good. Better if you add your own sauce / mayo.

Very much enjoyed it

Was very surprised. Didn't believe you could cook it in 2mins at 600w but. it worked. Would give it another 10-20 seconds to be on the safe side. I actually though that the oven cooking instructions had not printed but, it's not suitable for oven cooking I guess. I lived in the Middle East for 50 of my 70 years and while it can't compare to a good Middle Eastern Shwarma in a fresh pitta, it nevertheless, did not disappoint. Found it to be tasty, slightly spicey towards the end and by adding a tbs of good humus, good stuff from the Middle East (look for Sabra in Tesco) it was almost like 'back home'. I certainly would recommend it. If I wasn't a pig, I'd have the 2nd one right now. Have to wait until tomorrow :-(

The best product I found for both being able to store for a long long period (frozen) and being ready to eat within the least minutes (2 minutes straight in microwave, no preheating of oven needed). True I saw no sauce there but that gives me the flexibility to putting whatever sauce I like there, to make it even better.

Shame I like this item but it could be better with

Honestly never thought this would be any good. I j

Honestly never thought this would be any good. I just bought it to try it. It's AMAZING, so tasty and well cooked. 5 stars straight up

Please ignore the utter rubbish written in the other two reviews. This is the closest you’ll get to an authentic Mediterranean style doner kebab flavour in a microwave kebab. The quality of the pitta bread is far better than any of the alternative microwave kebabs I’ve tried at any supermarket, as is the doner meat. It’s also filled with far more meat than any other microwave doner kebab I’ve tried, and the ‘white onion’ mentioned in another review is actually cabbage, not onion. Draw your conclusions about the accuracy of the other reviewer’s comments from that fact alone. There is no sauce, but so what. Squirt some of your own sauce into it. It’s a far better idea than buying an inferior microwave kebab just because it has a tiny sachet of sauce included with it. As for the frozen kebab meat that tesco used to sell, I’ve tried that too. It tasted like a mouth full of chemicals so I had to throw the whole lot away. No wonder they stopped selling it. It was foul. In conclusion, this product can’t hope to compete with a real Mediterranean doner kebab (I.e Greek or Turkish), but it’s definitely the closest flavour you’ll get from a microwave kebab and the quality of every aspect of it is far better than any rival product by a long chalk.

This kebab is nothing like it says on the packet.

This kebab is nothing like it says on the packet. There was one before that Tesco did that was Fab. Why they let that one go and kept this one who knows??? Soggy, tasless, and rubbery. This one would be OK? if all was seperate and Red Onion NOT White. We Can add salad if we want and reduce the price as this is a Rip off for the poor quality. Also you used to be able to get a really good kebab meat and then build your own. You can find an authentic Kebab sauce online. I used mint,basil Avery little sugar, Buffalo chilli sauce and a squirt of tomato puree and no sugar also season to taste with a little lemon juice adapt to taste there you go. If you have any chilli sauce left after a Doner Kebab Takeaway. Try my sauce and compare. Tesco Please bring Back the Kebab Meat!