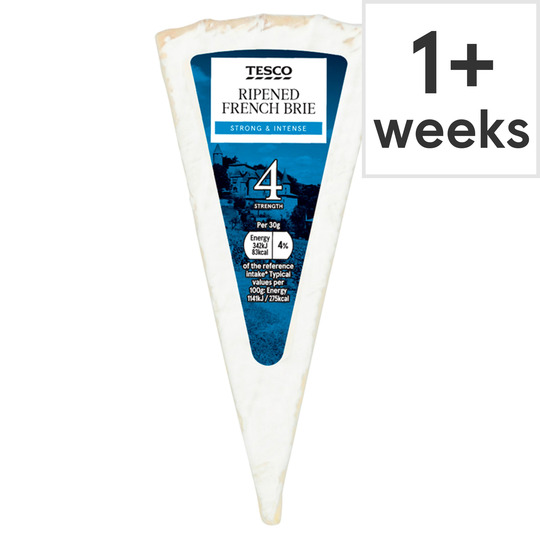 Keep refrigerated. Once opened, consume within 3 days and by 'use by' date shown.

Made using milk from France

This is definitely not for me; I prefer a milder Brie. The texture was right but the smell was rank and I could barely lift it to my mouth because of it - and when I did the taste was just as bad.

I love Brie, I love strong flavours in general, but not sure what this was. Stank of cabbages or something equally bad, really strong smell when opened, enough to make me pause, left if for a few mins to air, smell didn't reduce so (against my better judgement) decided to try a tiny bit in case I was being overly sensitive ... It was ripened after all! It was vile, had to spit it out and rinse mouth out. Never again. Might have had a bad batch but it was only bought day before and had 2 weeks before date expired. Truly awful.

Excellent flavour and texture. Less sticky than an unripened Brie, but not overpowering. Superb cheese.

The most disgusting thing I've ever had.

Literally the worst smelling and tasting thing I've ever had! Stank like old cabbage and tasted even worse. I bought 4 for Christmas and they've all been binned. I love brie but this was utterly disgusting. Never, ever again!

Good texture but *very* strong ... if you want a mild brie this is not for you!

This is unlike any brie I've had before and would agree with previous reviews that it tastes and smells more like a blue cheese - I'm not sure if it's supposed to - is that why is says ripening?!! It still has the texture of brie and i luckily like blue cheese so am able to eat it but I'll avoid buying this one in future.....if i want blue cheese i will buy blue cheese!

Worst Brie I have every tried in my life!

I love brie but this product is not brie by definition (as far as I am concerned anyway), it also has some other issues; (1) Lets start with the packet stating 'Ripened' not 'Ripening' as the website states - which one is it (I suspect it certainly isn't ripened and if not the product life is 1+ weeks). (2) It has more solids than soft cheese so technically not a brie yet (again I am no expert). Suggest the producer turns it into a slurry and sell it as a stinky cheese spread which would be more feasibly called a cheese at least. Frankly amazed no one has spoken to trading standards to get this stuff off the market, but not my beef - people vote with their wallets. (3) It stinks of penicillin or similar to very stinky blue cheese; if that's what you like perhaps a blue cheese that's aged correctly would be a better alternative. (4) Due to the solids it tastes exactly like mature cheddar with blue cheese added into it. Reminded me of some Austrailian chedder that I left out in the sun for a few days as a young adult which I had to try eating because I was in the middle of nowhere and was very ill as a result. (5) realistically the Cranfields brie that has some solids still in it that has virtually no taste due to lack of aging at least has a brie texture to it and smells far less (if you want some cheap tasteless brie), alternatively if you are flush I suggest the El Presidente brie, it costs more but you have much better process control and thus are never disappointed when you taste it and not often present with solids. If some perverse take on uncured brie floats your boat pull the trigger on this 'brie'.

A superb Brie, and not expensive. My partner think

A superb Brie, and not expensive. My partner thinks it is divine, though he says the 'best by dates' are not always correct (he says usually under ripe on buying, no problem, we buy 2 a week, so can have some left over. We have it salads daily, sometimes a Brie and Tomato sandwich, then just eat it on it's own often, daily.... I haven't tried it hot yet, usually use a blue cheese for that. We have bought this for many years. Well done Tesco