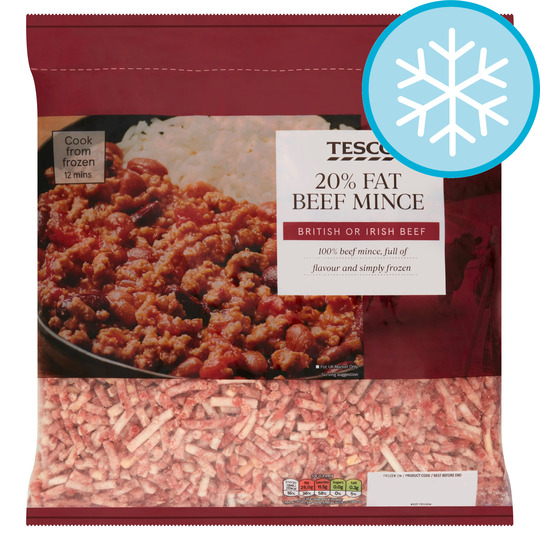 Ignore the bad reviews if you can cook you’ll love it!! It’s frozen but cooks down quickly over a high heat. I use it for everything I would use fresh mince for and wouldn’t be without it. At first I was using too much so I measure out the mince in portion sizes in a bowl before I add it to the pan

Mince was very good!! great to have in the freezer to make chilli etc, and the value is great also, would now prefer over the chilled mince which i usually froze anyway!!

For frozen mince I actually find this pretty good. Yes its not as nice as fresh mince, but its really handy to have in the freezer for a back up meal without having to worry about needing to use it within a month like you do if you freeze fresh mince. It cooks really quick, but be sure to have the pan on a very low heat as it can burn. It does go a bit soft and more mushy than fresh mince, but its not chewy or grizzly. I find this works really well for a spag bol. You do need to put more in the pan than you would think though as it shrinks a lot more than fresh mince. All in all a good find though!

Good meatball mince if you prepare it properly.

This item was delivered as a substitute because the lower fat version was unavailable. I put it in a large saucepan, covered it with water then simmered for a couple of minutes. Most of the fat floated off, so I strained the mince into a colander, rinsed it and made meatballs with it and froze them. They really were excellent, cooked in a tomato and basil sauce. The separated fat I solidified and fed to the wild birds.

I have never been so ill as I was after eating this mince I am at 2 days after eating it and am still not able to eat anything, whether it was a bad batch or not I don't know but I most definitely will not be buying it again, wish I could give no stars.

Totally inedible. Made a spaghetti bolognese. The texture and above all the smell of this mince was so awful it went straight in the dustbin.

used in a spag. bol. The texture isn't very nice. It breaks down into very small bits - slurry-like.

You get what you pay for!

No, it's not the best mince, it's not as good as fresh, but if you cook as per instructions and DRAIN IT, it's perfectly acceptable for a family mid week meal. It won't win any Michelin stars but it does what it says on the tin/bag...

Great to have in the freezer as back up.

I have had no problem using this mince unlike other reviewers. Cook it quickly and it keeps its shape and texture well.