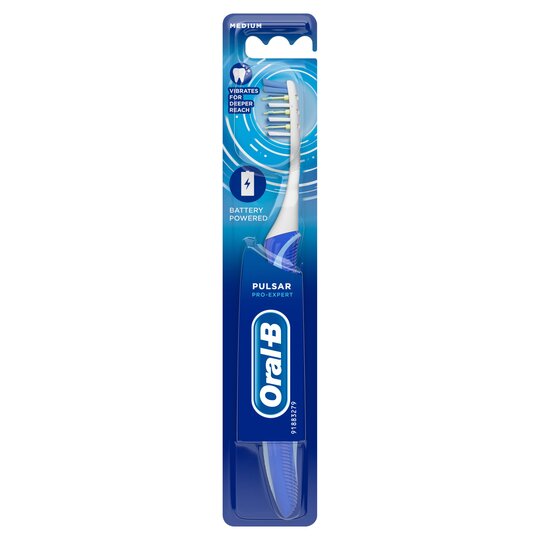 My kids were given these as presents. The battery lasted about 2 weeks then design does not allow for the AAA battery to be changed without destroying the end contact. What a waste of resources and embodied energy. Can’t be recycled either due to the black box integrated design. Dreadful in this age of climate worry.

garbage! better using a stick from a tree

terrible product! came with a battery that died after a week. to replace the battery you have to bend back the end contact for the battery connector, which is quite tough and sharp metal. after putting the new battery in I couldn't get the metal connector to sit in the right place so the power button would work properly, either wont turn off or wont turn on. advise that you steer clear of this garbage.

Have used oral b pulsar for years after being recommended by a friend. Always make teeth feel cleaner than a normal toothbrush wouldn't use anything else now

It would appear to be impossible to replace the battery. Twice I've attempted and both times completely failed. This therefore makes this toothbrush a complete waste of money and time

Cheaper alternative to an electric brush

A great toothbrush that gives a lovely clean feeling. The shape of the bristles gets into all the hard to reach areas and the vibrations really help to give a good thorough clean. By far better than a standard toothbrush. It's maybe not up to the standard of a good electric brush but is definitely on a level with some of the cheaper models. I had no issues with the battery and it kept going strong up to the point I needed to replace it. A much cheaper alternative to an electric toothbrush . [This review was collected as part of a promotion.]

I've used this toothbrush for a couple of years (3replacements) and love it, I've now got all my family one aswel.

Great toothbrush at a reasonable price. It lasts me a long time and I have never known the battery die. However, the bristles do get bent over time. As it vibrates and does not go in circles I am not 100% it is as good as a expensive toothbrush?

Feels clean but is it worth the price?

I have used this a few times before and can say that after each use, my teeth definitely felt clean! It's easy to use, you just push the button and it'll start to vibrate. No need to charge and it lasts for about 3 months which is when you should chuck it away anyway and use a new one! I've noticed over the years though that they are becoming more expensive which is why I no longer go for these! However if you are sick of using an electric toothbrush and having to charge it, then this is the next go to (if you can part with some dough...)

I have bought 3 of these brushes now and in less than 6 months all 3 have broken down and stopped working when it happened the first time i thought it was something i did, while trying to replace the battery, the second time, i was very careful when replacing the battery even though it was strange having to replace it after only a couple of months , but having had a third brush breakdown within 7-8 weeks of purchase tells me all i need to know, this brush is USELESS, trying to change the battery over is incredibly difficult and clearly there's a problem with the way the battery connection works as it doesn't last long.

Disappointed with this brush as having so much gap between the bristles just allows toothpaste to sit deep in and just rinsing under a tap does not remove it, so its then a hygiene problem, with old toothpaste lying there and going into your mouth each time. I am very careful but found myself having to poke out old paste.