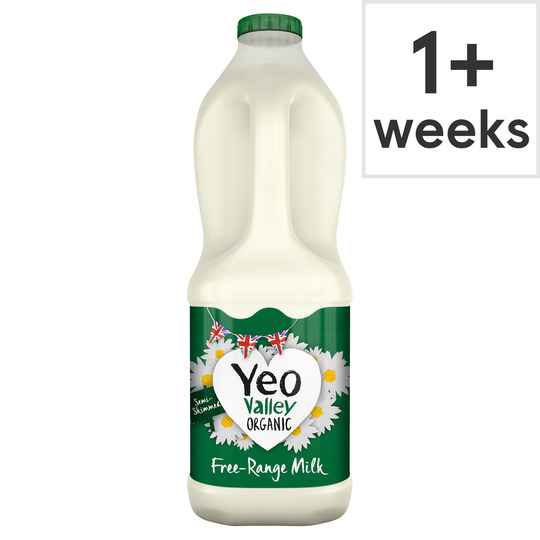 Keep Refrigerated Below 5°C.See Best Before Date on Front of Bottle. Best Consumed within 3 Days of Opening.

British Milk. Made in UK

I normally buy skimmed milk but needed semi skimmed for a recipie. Was really suprised that a semi skimmed milk could be this creamy. It made my coffee really nice and when i made porride with it it turned out to be the best i have ever earen. I have now switched to this milk for everything.

Looks like milk and tastes like milk. Not sure why it is so expensive. Bought as part of a promotion.

Iâve been drinking Yeo organic milk occasionally and I think it one of the nicer milk. The 2L version is much more convenient than smaller bottles.

I really enjoyed this milk. I have milk on my cereal, so I really get to taste it. It tasted lovely and creamy.

This tastes really nice and is great for my porridge in the morning. The only thing that I donât like is that itâs much more expensive than other milk. Bought while on offer

Tastes as good, if not better than normal semiskimmed milk. Bought as part of a promotion.

I don't normally buy semiskimmed milk, but this one from Yeo taste really rich and refreshing compare to other branded semi-skimmed milk, bought it as part of the promotion, I would consider the change to drink Yeo's semiskimmed in the future.

A creamy tasting semi , that lasted well lovely in coffee and on my cereal too

The best milk, very creamy and tasty I like the packaging and yeo loyality points . I would buy again. Bought on a promotion.

This tasted nicer than standard milk. But i do think its too expensive. Bought on offer.