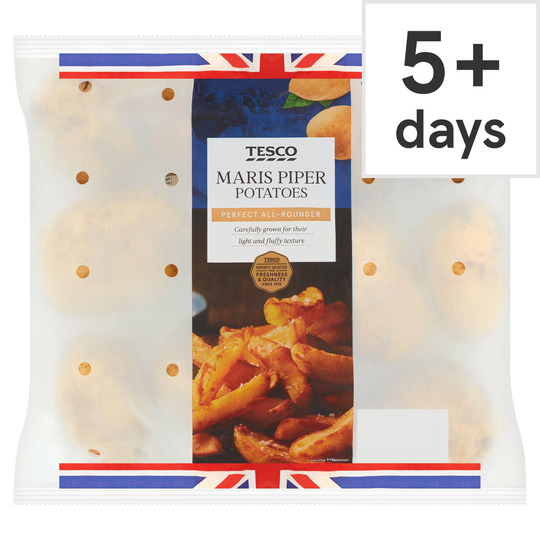 Store in a cool, dry place out of direct sunlight.

Shame on you Tesco.

Usually buy Maris Piper and usually good but these were awful. Don't know when they were harvested but skin old , dry and wrinkled. Lots of black areas under skin. I only got 2 servings from 2.5 kgs. Shame on you Tesco for selling these. Suggest you get another supplier and perhaps a buyer who can tell good veg from bad.

Such a lot of waste. Potatoes are bruised and rott

Such a lot of waste. Potatoes are bruised and rotten, not just in this particular pack but previously bought ones too. Not nice

I don't hate them, they aren't edible! I have given up buying these. Most of them are black inside and unusable. Sad because we like them when they are fresh.

Not good enough to sell to the public

I had these potatoes as a substitute. They are quite unacceptable. There are lots and lots of black spots. I shall not accept them again. I don’t like using the word ‘hate’ but this is what popped up under 1 star; again unacceptable description.

I have had these twice now and twice they have been full of black bruises or damage, so I end up throwing away at least half of the potato. Very disappointed as they are supposed to be good potatoes.

Only good for compost

As with previous reviews these potatoes are full of black marks under the skins so at least a third end up in the compost bin. Tesco really need to start acting on so many negative reviews by either changing supplier, changing the way they are stored or lowering the price. Back to Lidl for my Maris pipers!!

All the potatoes had so many big black patches under the skin that I had to peel most of them away! Ended up using a knife to cut the skins and black bits off rather than a potato peeler. Peeled potatoes fell apart when boiled but made crunchy roast potatoes which surprisingly tasted fine.

They'd be nice if they weren't ready to start sprouting. Vegetables produce toxins when they sprout!

How long have these potatoes been stored and where

I opened the bag to use the potatoes about 3 days after receipt. They are horrible , at least 4 were rotten and most of the others are black most of the way through.