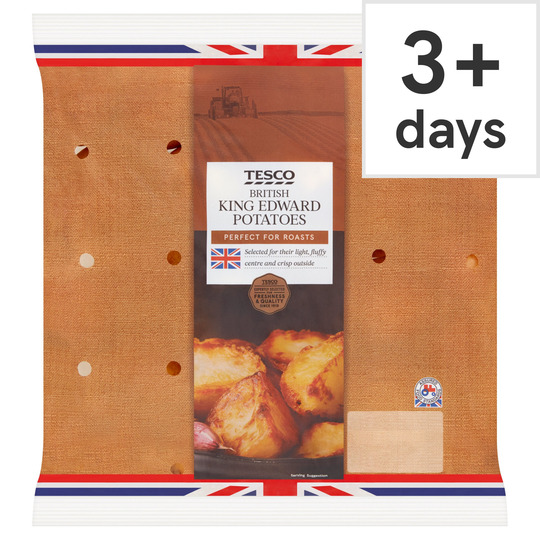 Store in a cool, dry place out of direct sunlight.

I had to throw away most of it.

Worst potatoes we ever bought. Looks nice from outside, but very bad once peeled. Full of black marks. Bought 5 kg and 90% of it had to be thrown away. What a waste!

King Eds too small to use!!

I do like to use KE potatoes for roasties, however i don't know what's going on with Tesco lately. The size of the potatoes have been so small, that once peeled, they are only big enough to mash! It only seems to happen with one of their suppliers. I currently have 3 different packagings for Tesco King Eds, and each one comes from a different supplier in 3 separate parts of the country. I have complained to Tesco via email, and sent photos, but still 90% of the bag are on the tiny side...it's hardly worth even peeling them! Please sort this out Tesco......until you do, I'm not going to risk buying them online from you, and will have to source my spuds elsewhere :o(

Cooked well and tasty-after the bad bits had been

Cooked well and tasty-after the bad bits had been cut away! Very wasteful!

YOU'VE HAD YOUR CHIPS EDWARD!!

These were HORRIBLE! Almost every one was full of black marks when cut - very very poor indeed! Some went soggy within 2 days and left foul smelling slimy liquid in the bag. They went in the bin. King Edwards are supposed to be very good spuds - well I don't know what on Earth is going on with these - but they stink - LITERALLY!! Presume it's either bad handling or very old spuds? Either way just one massive let down. Do not waste time and money on this trash!

Although they were tasty enough, the majority of t

Although they were tasty enough, the majority of the potatoes in the bag were split/cut, meaning there were lots of black rotten bits that had to be cut out - bit of a waste!

Good Quality potatoes just like '' balls of flour '' i would highly recommend these potatoes also if Tesco could pick or add slightly larger potatoes as some are very smal & rather difficult to peel apart from that perfection.

Awful. So weirdly shaped that they were impossible

Awful. So weirdly shaped that they were impossible to peel with a peeler and too small to peel with a knife. They can't be seen through the bag (that's a picture on the front), I won't make that mistake again.