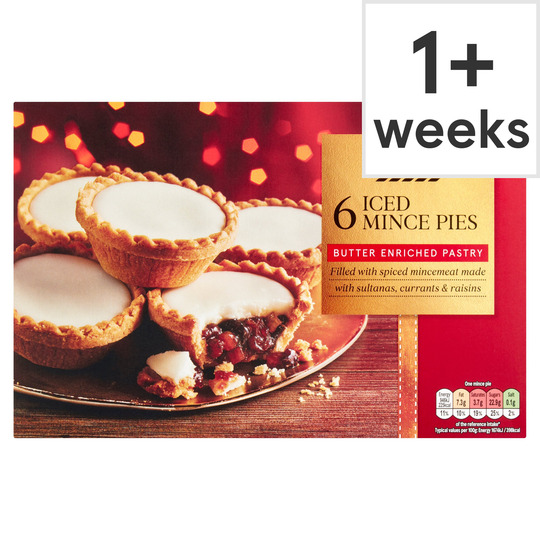 i love mince pies and this one was lovely but crumbly was cheap and good value for money. I would buy them again thanks

I won't mince my words...these taste delightful but are as crumbly as the cliffs of Dover. Make sure you have a plate/serviette/anything to catch the crumbs as it disintegrates before your very eyes.

Like Bakewell tarts but better! I loved these and

Like Bakewell tarts but better! I loved these and will get them for the big day!

THESE ARE YUMMY - SORRY THEY HAVE SO MANY CALORIES

THE BEST IN THE WHOLE WIDE WORLD.

Really moist mince pies, super flavour and I do lo

Really moist mince pies, super flavour and I do love the icing on the top !!

far to sweet and crumble easy

Hi I have eaten this product now and can say I am a bit disappointed but still they are nice. The pies break very easily so make sure you have a plate underneath your chin because they just collapse once taken a mouthful. The stuffing is not as firm but surprisingly tasty against Tesco Finest mince pies. I also want to say there is an art to stopping all pie's from collapsing and no its not eating it one go. I do not think they are bad overall, the filling is moist and probably helps toward the pie collapsing after one bite. Generally if you hold the pie from the bottom they do not cave in, where as if you hold around the top edge I feel they all cave in. I also think the Icing just makes them more sweet which is not needed and making the pie top heavy. However these would be perfect if using off a plate with a fork or spoon? I gave a mark of 3 because had this not had the icing on I think I would have these over the Finest product.

This mince pie is perfectly edible and tasty, but it pales into insignificance when compared with the equivalent product that is made by Mr. Kipling. For me, the icing is a little hard and the mince is a little too bitty and over-spiced. Saying that, I did once eat three in one sitting, but that says more about me than the pies themselves.

Very disappointed with these iced topped mince pies this year. The icing is quite hard & when you bite into the pie it just completely disintegrates into lots of small pieces. I was hoping for better & won't buy again