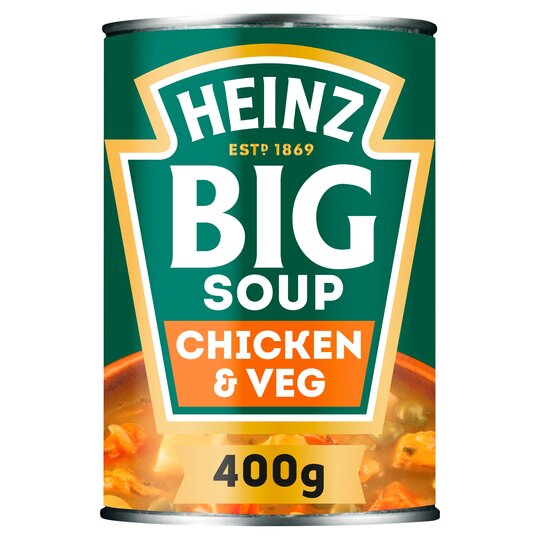 of the reference intake*
Typical values per 100g: Energy 211kJ

Empty any unused soup into a covered non-metallic container and put into the fridge. Eat within 2 days.Best before end - see can end.

Hob
Instructions: Hob: Empty the soup into a pan and stir gently while heating. Do not boil.

It's very nice and nutritious.

It's very nice and nutritious.

Seems like every product people review on Tesco Groceries they are negative and so many reviews are unjustified! As with this soup... It's lovely! It's tasty, it's a broth-like consistency but just a little thicker, perfect. People saying there's not enough chicken - erm, it's chicken AND veg soup! It has an even proportion of both chicken and veggies. I really enjoyed it and will be ordering again... agree with the comments that it does explode a bit in the microwave but you're not supposed to review it based on your dodgy microwave, you're meant to be reviewing its taste and texture etc. One question I do have though is why do Heinz call it 'Big Soup' - it's a standard 400g soup can!! :)

As another person on here said it's no good to do

As another person on here said it's no good to do it in the microwave unless you want to spend your time cleaning it out, but done on the job it's fine

Medicore, boring, a waste of money

Mediocre, like most Heinz canned soups. I only bought it because I had a voucher. Heinz canned soups are by far the most boring of all the soups available and always taste the same. Yesterday I had the steak and potato variety and you couldn't tell the difference. The only soup brand worth eating is Baxters.

One of the better Soups

Very tasty soup, a bit over priced for a giant producer such as Heinz but it is nice.

Not microwavable(explodes) tasty during bad colds.

Not great in the microwave, tends to explode all over the microwave when being heated - also over flows, but very tasty in a pan on the cooker when you have a bad cold. One of my traditional favourites to have every time I get a bad cold or flu. I buy 10 to 20 tins of these per year.