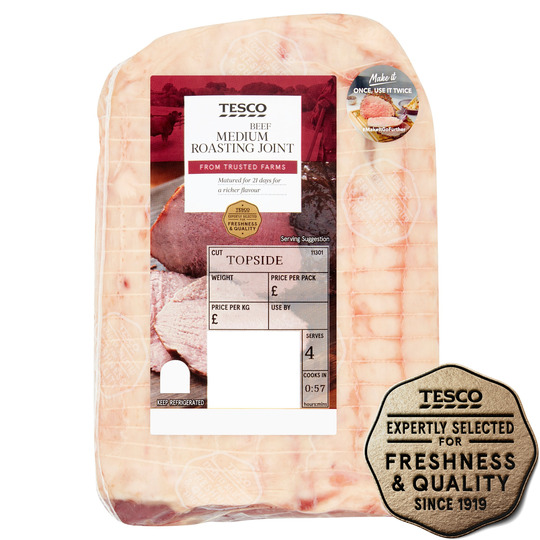 Suitable for home freezing. Ideally freeze as soon as possible after purchase but always by 'use by' date shown. Not suitable for cooking from frozen. Once defrosted use on the same day and do not refreeze. Defrost thoroughly for a minimum of 24 hours in the fridge. Follow the preparation guidelines above. Keep refrigerated. Once opened, consume within 1 days and by 'use by' date shown.

Instructions: 180°C/Fan 160°C/Gas 4 Place in roasting tin, lightly season and cover with foil. Roast in centre of pre-heated oven. For a medium roast, cook for recommended time on front of label (6 minutes per 100g). A medium roast will be pink in the middle. For a well done roast increase cooking time to 8 minutes per 100g. 15 minutes before end of cooking remove foil, baste with cooking juices and place back in oven to finish. Remove from oven, cover with foil and rest for 10 minutes. Remove strings, carve and serve.

Tough despite being only medium cooked and bloody

I am afraid I have to agree with the other reviews. The silverside was awful. I am not sure about the principle of ordering on the basis that you might receive either silverside or topside. They are very different. I certainly would never buy silverside again but have no way of knowing which I would get.

Received twice as much as i ordered which was nice

Received twice as much as i ordered which was nice, but what is the point when there is a thick layer of gristle all the way through the middle. Embarrassing and disappointing for me, AND THE TESCOS BUYER. FIND NEW STAFF.

Have always bought Tesco beef when it has been at

Have always bought Tesco beef when it has been at offer price, so I was very disappointed with the one I had for Christmas dinner, absolutely tasteless, tough and no beefy smell whilst cooking, Cooked in a slow cooker which has always been perfect. Worrying bit is I bought several of these joints to stock up on.

Due to unforeseen circumstances, Christmas dinner had to be postponed so I decided to buy the Tesco Medium Beef Roasting Joint on Christmas eve while I save the other meat I bought for a later date but as others have stated it is the worst. Cooked to the time stated and it's raw, put it back in to cook and it came out tough and inedible as it was near impossible to chew down. The vegetables and sauce I cooked ended up getting cold while I waited for the meat to cook and by then it was not worth the wait as I could not even eat the meat. I haven't bought meat from Tesco for a while and likely will be a long while before I do again. Shame I can't give zero stars.

Really disappointed. Was so tough that it was inedible despite being cooked to recommended time and temperature (checked with thermometer) and rested. Even the dog struggled to eat it after we gave up!

Purchased for Sunday lunch, cooked as directed, perhaps we were unlucky but this was a truly awful joint of beef, lots of sinew which should have been removed during butchery. Will definitely not purchase again!

Do not buy if it is Silverside

Tough and unedable. I cooked it for the correct time and ended up rwith a meatless Sunday Lunch. Now I have looked the packaging it is Silverside, only suitable for cooking for a number of hours in a slow cooker.

These joints went downhill last Xmas and are same this year. I have in previous years stacked freezer with these joints, however since last Xmas they have changed. Big fat lumps of fat just stuck on top and meat chewy. what have they done?? No more for me