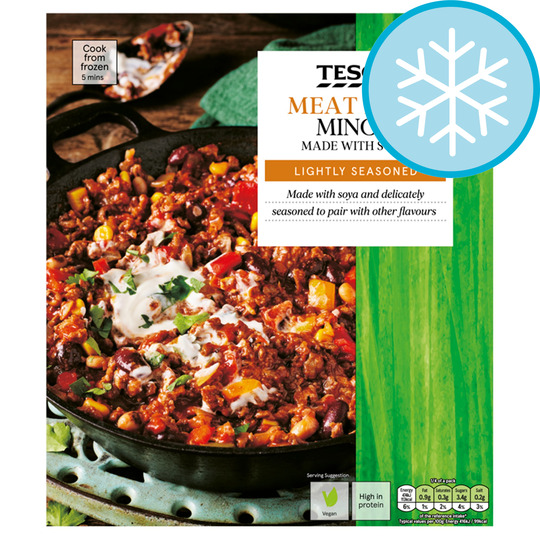 One-quarter of a pack contains

Hob
Instructions: Heat a little oil in a heavy based frying pan or wok. Add one-quarter of pack and cook on medium heat for 3-4 minutes.
Check food piping hot throughout before serving.
Time: 3-4 mins

This wasn’t great the texture is most unpleasant and as for the taste I can’t decide What it’s supposed to be ... I used it to make a chilli which is normally my signature dish but had a veggie staying with us so thought I would replace the beef mince with this ... it was completely inedible NEVER AGAIN

What a pity they had to include wheat flour. This

What a pity they had to include wheat flour. This would have been a useful gluten-free product otherwise.

Absolutely disgusting chewy and tasteless I threw it in the bin

Aways have a stock of this

As mentioned before best to fry onion then add the mince.Do not add it at the end I use it for all dishes where one would use mince meat. I do not like quorn products much prefer soya as a protein.

I always have this cooked in a sauce so can’t comment too much on the flavour, but I like this mince, it’s cheap, easy to prepare, and the texture is decent. Better all round than the dried stuff for me. I sometimes mix with dark lentils like puy lentils in a chilli or cottage pie, but much prefer the mix to plain lentils.

Used as can longer find Quorn mince at Tesco stores. Too sweet and sludgy. Not inedible, but a poor substitute.

I like the texture and taste. Its not too chewy or

I like the texture and taste. Its not too chewy or too soft and doesn't have a greasy taste like some other meat free mince. I fry it in a little oil with seasoning and spices to give it more flavour, before adding to saute onions, carrots and celery for a vegan "sheperdless pie"

Looks, smells and tastes extremely unpleasant. I bought this as there was no Quorn mince available, and my family are currently picking at their food in a very uncharacteristic manner! Thankfully there's a pudding!

This has wheat in making it unsuitable for people with Coeliac disease or wheat intolerance. There are many alternatives to wheat flour (rice, potato, corn flour etc) so it's a shame to use something that makes it unsuitable for so many people

better taste than Quorn in my opinion- and better value! packed with protein too.