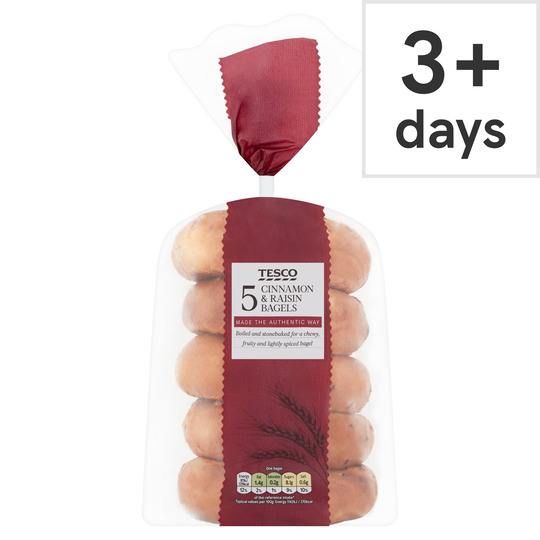 Once defrosted use on the same day and do not refreeze. Store in a cool, dry place and once opened in an airtight container.

These are fine, ignore neg reviews, give 'em a try

I previously avoided these because of negative reviews, but pleasantly surprised. They are fine. Ordering them regularly now.

Really tasteful, great to pop in toaster for a di

Really tasteful, great to pop in toaster for a differnt choice for breakfast...yum yum.

These bagels are horrible, no flavour to speak of and I think someone forgot the raisins as they're very few and far between.

the taste was predominantly of mixed-spice, not ci

the taste was predominantly of mixed-spice, not cinnamon.

Not what it says “on the tin”

There was not even a hint of cinnamon in these beigels and it was definitely "hunt the raisin". Like eating cardboard. Upgrade to the named brand, much better.

what time does you use bangels in a toaster.

because when you cut in half in the medium it will make me feel easy and i like bagels with 5 packs so i like it so much.

Was sent these as a substitute for the warburtons ones I had ordered. Extremely disappointed, they don’t taste like anything and are quite hard in texture, tasted like plain toast to me. Avoid these and pay a little more for the better brand!

I love them! Bot as good as New York ones, but price is lower so I can’t complain. I really like them and I like their delicate flavour. They could be a bit softer, but after tosting them they are fine.

It 2 thirds of the price of the more expensive ones ( New York & Warbies ) but it lacks any taste. The fruit content is poor , about six raisins, and the cinnamon flavour is also very hard to detect. I know you don’t want it be overpowering , but it could definitely do with more cinnamon. If you haven’t had a decent bagel before, you might think it’s fairly good, but I think I will go back to Warburtons thins . I only have mine toasted, so rely on the bagel itself for flavour.