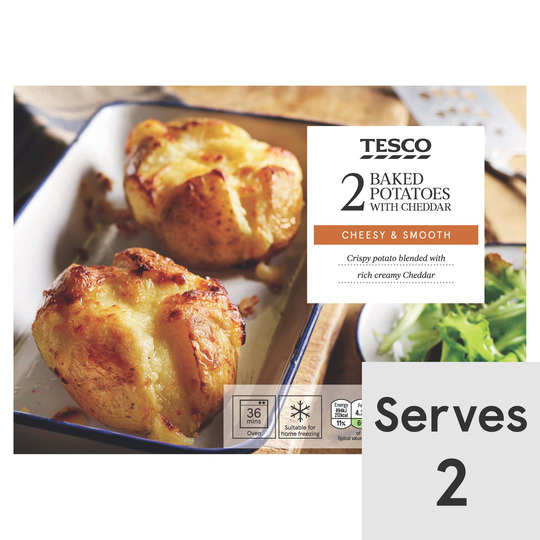 Suitable for home freezing. Ideally freeze as soon as possible after purchase but always by 'use by' date shown. Follow the preparation guidelines above. Once defrosted, do not refreeze. Defrost thoroughly for a minimum of 12 hours in the fridge. Keep refrigerated.

Instructions: Not suitable for microwave heating from frozen.

lovely, but you have to cook it longer in the microwave than the instructions say.

the last two weeks that i have purchased these they have been undercooked. cooked for 40 mins from chilled and still raw and had to throw away wont be buying these again

Potato isn't mashed -- it's chunks and far too hard for my taste. I like *soft* potato inside the skin. Was unable to eat much of the first one, as it didn't taste cooked: Easy solution in future -- cook for considerably longer than stated in instructions. A few minutes more in microwave. Then hopefully the potato with be softer and will be edible. I might also add more cheese when cooking. Not sure whether cheese would be affected by longer cooking. .

These potatoes are quite tasty, but can be a little dry, I found mixing in a little butter and adding an extra sprinkle of cheese, then 5 more minutes in the oven. Perfect. The comments about meat in these potatoes are about the wrong product, there is no meat at all in these

The top part mixed with the cheese was OK but not very cheesy. The under part of the potato was hard and not thoroughly cooked through. Followed instructions and cooked first one in oven and the other one was microwaved both from chilled and they were both hard. Ate the top bit and threw the rest away. MCcain microwave are deco the better option when in a hurry.

Cooked for the recommended time but there are hard lumps of uncooked potato. I won’t be ordering them again until the quality has improved. Very disappointed!

These potatoes were cooked in a conventional oven

These potatoes were cooked in a conventional oven for the said time and were inedible; there was hardly any bacon in them and the potato itself was hard!