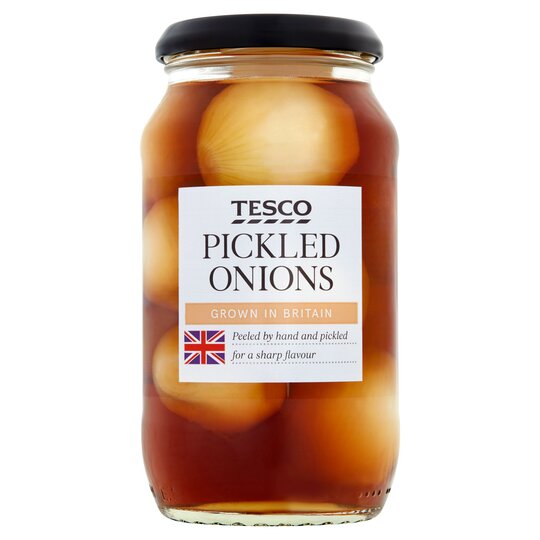 Store in a cool, dry place. Once opened, keep refrigerated and consume within 6 weeks.

OK but less mellow than a well known brand.

OK but less mellow than a well known brand. Rather pale. Claim to taste 'sharp' - that isn't really a good thing.

I am an onion lover who eats them whilst cooking the tea but your onions were soft the vinegar seems watery and weak,a few years ago you changed supplier or changed the manufacturer before you did the onions were always crispy vinegar was stronger and had a very nice taste l had at least 4 jars per week,but l thought l would try Tesco's again as every do often l try Tesco's just to see if they have changed but sorry to say they have not changed so l as m still having to have Haywards they are a lot dearer that Tesco but they have the flavour and more crispy sometimes.l must say thought that out of the supermarkets brands l have had so far Tesco is the best.l hope one day you think about resorting back to the old reciepe.Sorry l only gave it two stars but the amount of onions l have Tesco needs to be a lot better than it id

I usually make my own pickled onions so was not expecting a great deal from these but they were awful!!! They were soft, tasteless and the vinegar very watered down. A very big disappointment.

My husband has become addicted to pickled onions so these are the best value. They're crisp, not too big and done in proper malt vinegar, pity the bigger jar is discontinued.

I absolutely love crisp pickled onions. The flavour was nice but unfortunately these were very soft. I won't be buying them again.

I love crisp onions, have tried quite a few brands but this must have been the worst. The onions are squashy, slimy, almost like sponge, certainly not edible. I don't know if I am just unlucky with this jar but I certainly will not be buying any more.

Really tangy and they do pack a punch however can

Really tangy and they do pack a punch however cannot stock a few more into a jar ?