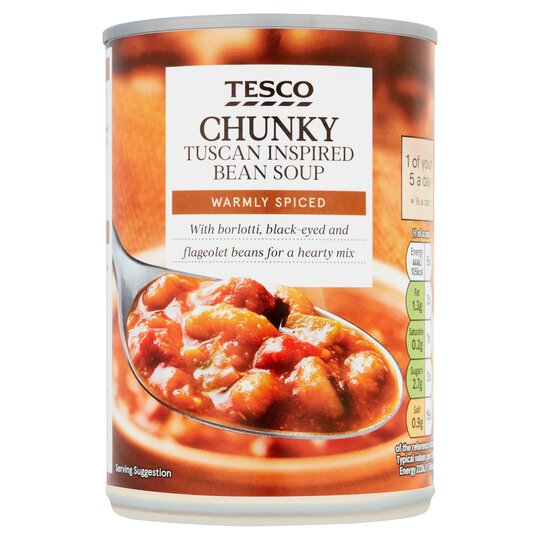 Store in a cool dry place. Once opened, transfer unused contents into a non-metallic container, cover and refrigerate. Consume within 2 days.

Hob
Instructions: Empty contents into a saucepan.
Heat gently for 3-4 minutes, stirring frequently.
Do not allow to boil.
Time: 3 - 4 mins

This was one of my favourite soups, but sadly not any more. It used to be flavoursome and thick, now lacks flavour and is runny. Why change a good product!

New ones are terrible, used to eat this all the time I mean like 10 tins a week lol, but now I won’t ever buy it again! Ruined it!

the new version of this product has gone from 24% beans to 13% with 10% lentils. It is now runny and lacking of vegetables. so much so the old label said it was 2 or your 5 a day now it's 1. Cost cutting that's ruined the product I used to eat a lot.

My husband thinks this is the best soup he has had

A Golden Glow for an autumn day

Better than another brand named bean soup. A tasty satisfying soup we have at lunchtime.

One of the few bean soups I've managed to find on the market, and I love it! It's slightly spicy but not too hot to be uncomfortable, has a pleasing texture and is satisfyingly filling. I often make my own soup but keep this on hand for times when I need a warming soup in a hurry.

A once great product that has now been "improved".

This used to be the one of the best soups you could buy anywhere imho - thick, filling and full of flavour (with just a slight spicy kick to it) - but the recipe changed a couple of times for the worse (albeit slightly) in the past two years, and the price has recently shot up by a whopping two thirds, bringing it into line with the Tesco chunky soups range. No longer the great bargain it once was, and I don't buy it any more.