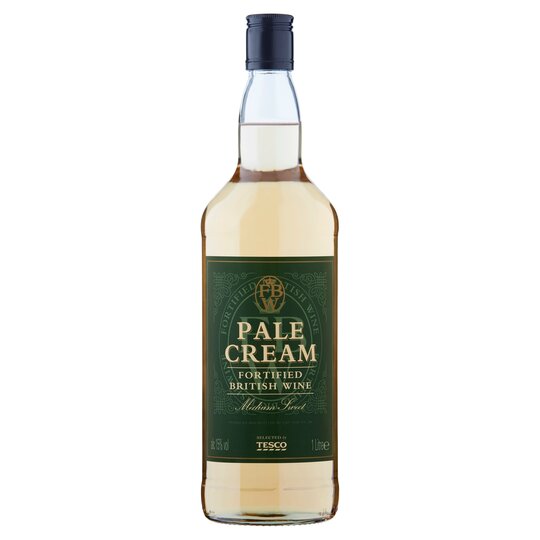 Store in a cool, dark place. Fortified British Wine will change character with prolonged storage so it is best consumed within one month of opening.

Not as nice as it was!

This has changed at least 2 or 3 times over the last 15+ years, and each time it's not been as nice. This version is just tolerable, which is why I've given it 3 stars - if it gets worse I'll stop buying it.

Taste as nice as the one they discontinued . Will be buying from now on. Only wish was in litre and a half bottles.

I used to love the Tescos own pale cream fortified wine...I don't know why it has disappeared and been replaced by this horrible inferior rubbish! I tried the Morrisons Manor Hall and that was not like it at all. Bring back the old one! Why do you keep changing things!

I also have been drinking Tescos Pale Cream Fortified wine for many years. This replacement wine is definitely not the same quality as the previous wine sold under the same label but in a green bottle. Today I purchased the Morrisons equivalent and for those who like me are dissatisfied I can recommend Morrisons "Manor Hall pale cream fortified wine " as one more like the quality of the previous Tesco version..

Bring Back the Old!

For many years I have enjoyed a glass of Tesco’s Pale Cream Fortified British Wine. I have just had a glass of the new version which is now being sold in a clear glass bottle and was very disappointed. It is nowhere near as smooth and sweet as the previous make. It is an inferior product, which I will not purchase again.

Really Disappointed in this substitute wine

Really unhappy with this substitute wine , the taste is nothing like the other fortified pale cream wine in the green bottle. I shall never buy this Disgusting wine again. Bring back the other Fortified Wine ASAP. That was lovely!!!! Why does TESCO keep changing things that are Popular.

You've changed the colour of the bottle AND obviously changed the supplier. As the previous reviewer said 'Nothing like the green bottle stuff'. Surely you MUST have had it tasted BEFORE you changed over or was it just a commercial decision..... x pounds per barrel cheaper, same price to the customer!!! We need to see the old stuff back or........

For many years I have enjoyed Tesco's Pale Cream Fortified Wine which came in a dark green bottle, which was in fact delicious. For some reason known only to themselves they have substituted it for, in my opinion a far inferior tasting wine in a clear bottle. This has only just happened, so the reviews November/December must have been referring to the original wine, not that which is now on sale in August. Until they reintroduce the original I shall not be buying any more

In a hotel, expect to pay as much for two small sherries as you pay for this litre of fortified wine. However, for its price, this fortified wine is really nice and makes a most enjoyable starter to one's evening meal. I make sure i don't run out.

a delightful addition to any night

I stumbled upon this tantalising wine only a few weeks ago, however it has now become a staple of most nights. whether your staying at home watching an episode of downton or having a 'boozy' dinner party, i can assure you this beautiful nectar goes with all occasions. I personally can't imagine a night with a bottle of the finest tesco pale cream fortified british wine! Even in the time of writing this review my mouth is moist with thought and longing of just one drop of this beautiful wine. I can only hope this review has persuaded you to be spontaneous and on your next jaunt to tescos, grab a case and enjoy over the festive period. god bless.