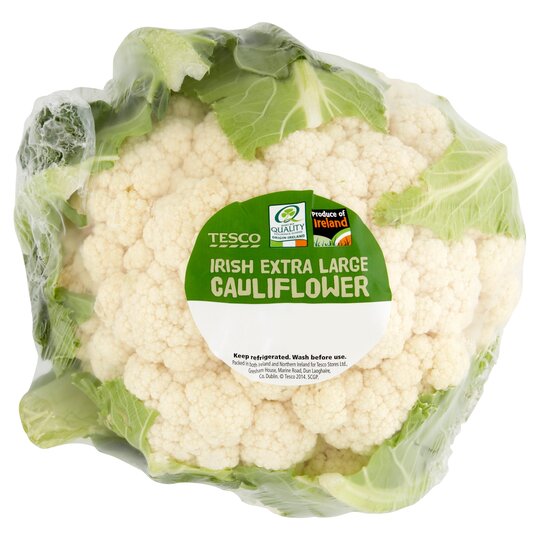 <1%of the reference intake
Saturates
<0.1g

<1%of the reference intake
Sugars
2.3g

I am disgusted with the quality of this product, it was yellow, soft and blemished, I’m afraid it went straight in the bin. This is not the first time I have received sub standard produce, I would never have bought this in store….

Not so much extra large as overblown and bolting. Arrived with black spots which rapidly spread to the extent that nothing was worth salvaging, so binned. Waste of money.

The Cauliflower I received was no bigger than an ordinary size on but twice the price. It would not have fed four, let alone the 8 advertised in the details. Very poor quality, shame on you Tesco for supplying such poor quality produce

Re delivered shopping:- the Cauliflower looked nice but smelled fusty and the size was smaller than standard despite paying for Extra Large. Last week I ordered a 'normal' Cauliflower and received one the size of a tennis ball hence my ordering extra large today - VERY disappointed

Sold as extra large but can honestly say i would c

Tiny cauliflower, half of the normal size.

Within 3 days, the cauliflower was covered in black specks and had started to discolour. About 60% was consigned to the recycling bin. I will not be buying again

Great buy, I bought it in spring summer time , these produced from Spain are tasty, the stem are light green, better than white stem ones. Large size too

Great throughout the early Spring, but for an ‘extra large’ cauli., the last two I bought weren’t, by any stretch of the imagination, extra large. In fact, they were distinctly average in size with more outside leaves than actual cauliflower. Back to buying two smaller ones then. ☹️