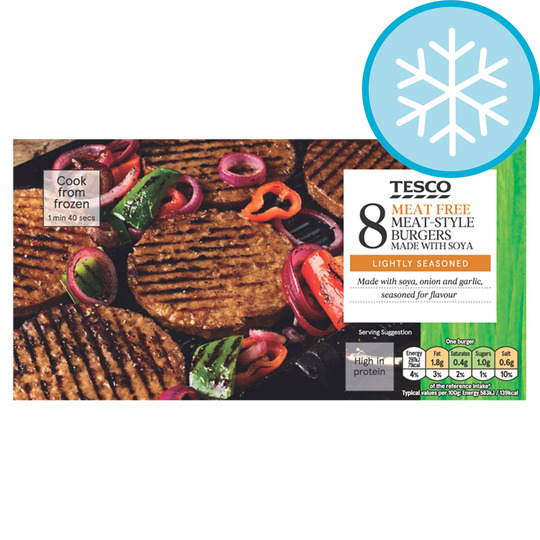 Suitable for home freezing. Ideally freeze as soon as possible after purchase but always by 'use by' date shown. Once defrosted, do not refreeze.

Instructions: Header: 800W 3 mins/ 900W 2 mins
Place on a microwaveable plate. Do not cover. Heat on full power. Leave to stand for 1 minute after heating.

Barbeque
Instructions: From frozen: For a chargrilled barbecue effect, cook as per grill or oven cooking instruction above, then place on the barbecue for a further 5 minutes, turning frequently.

Grill
Instructions: From frozen: Place under a pre-heated grill for 3 minutes, turning once. Time: 3 mins

Absolutely revolting and suggested cooking times for oven cooking not long enough. Complete waste of money as they went in the bin

So many bad reviews, I disagree. Try microwaving first then finish off in a frying pan to brown. Once they're in a bun or a flatbread with onions and salad they're great. Good value too

Don't know why there is so many negative reviews..

Don't know why there is so many negative reviews... They do need longer to cook but once cooked they not the best burgers I've had but not the worst either...

Awful. 3-5 minutes cooking time in oven, thought this was a little short but went for the 5 minutes. Prepared two baps while waiting, they came out of the oven looking much the same as when they went in. They are tasteless, thin, small, and go cold before you get half way through eating one. Binned them after eating half of one, binned the rest of the box at the same time. Waste of money!

Good for the price

Received these as a substitute for quorn sausages. The burgers tasted absolutely horrible. Nothing nice about them at all. Cooking instructions in the oven stated 3-5 minutes but it was hard to guess if they were cooked after 10 minutes so left them a bit longer on a higher setting. Would definitely not recommend.

Do not buy these!

Don't even think about buying these, definitely the worst burgers I've ever tasted. Horrible slimy things that never seem to cook however long you leave them in the oven. Nasty smell and taste and my family all felt queasy afterwards. Doesn't even rate one star.

One of the better meat substitutes I've had

I'm SO surprised by the volume of awful reviews for these. I'm meat free most days of the week and struggle to find reasonable meat substitutes - usually tasteless cardboard and nothing even vaguely like the real thing. I find many products from big name vegetarian brands not nice and very overpriced so tend to stick to supermarket own brands. Admittedly my first try wasn't fab - I had them plain with fries plus they didn't cook well at all. Reminded me of school canteen burgers in the 80s/90s! I then tried them in a ciabatta bun with other ingredients (cheese, mushroom, onion, lettuce) to make a "proper" burger, and cooked them longer... Much better! The flavour of the burger itself was far better. They need about 15-20 minutes to cook properly. It'll never compare to a meat burger but it certainly works for me as a lighter meat-free alternative. I have bowel disease and some foods trigger me but these have never once made me ill - not sure what people did to get ill from them! Now a staple in my online order!

These should be called "Salt Burgers". Not exactl

These should be called "Salt Burgers". Not exactly a healthy option when you check the nutrition table. They're also wafer thin and generally horrible.