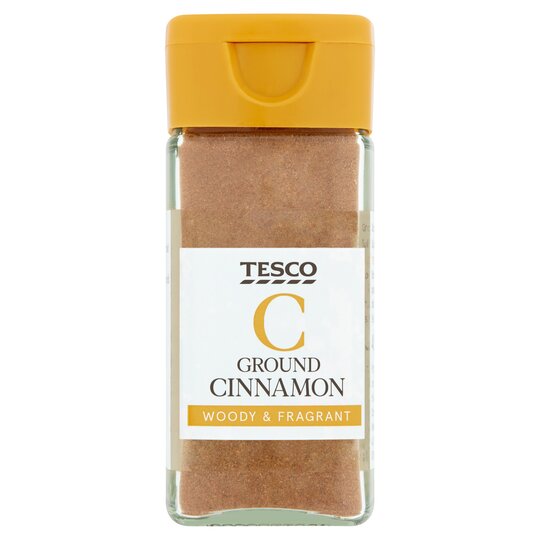 <1%of the reference intake
Saturates
<0.1g

This has next to no flavour. I have to use about t

This has next to no flavour. I have to use about three times as much as other branded cinnamon to get the same kind of flavour - making the cheaper price not really worth it.

What happened to cinnamon? I love the taste of cinnamon and use it in my muffins and buns all the time, but whatever is in the jar I bought from Tesco is... God knows what! Just ground bark from a random tree? It has no discernable smell or taste and has spoiled my baking today. As I added it to my recipe I noticed that the usual lovely smell wasn't there. Then I sniffed it. Nothing. Then I tasted a small bit on my fingertip. Nothing. I then remembered that I had another jar somewhere from a different store. Imagine my shock to find that it was exactly same. So... does anyone out there know where you can still buy real cinnamon or has the lack of EU standards taken that from us as well as bananas that are not mostly peel and strangely shaped?

I have no clue what is in the jar but it definitely isn’t cinnamon! It has no taste and smells more like paprika . It ruined my recipe ! It should be taken off the shelves

Not the 'Sweet' Cinnamon you're looking for.

I think some of the bad reviews are related to 'Tesco Ground Cinnamon' vs the almost identically branded 'Tesco Sweet Ground Cinnamon'. The sweet version smells and tastes like what the '1 star' reviewers are looking for.

Very poor quality, has dusty taste and smells awful, not at all like cinnamon. I think they used the floor sweepings!!

doesn't smell like cinnamon at all. like they ground the bark of any of tree. wonder what happened

Been buying Tesco Cinnamon for years, but this last purchase (April 2021) is SO different. I've experienced a very Harsh, Bitter taste. Not fragrant in any way. In fact I've thrown it away it's that bad. AFTER my findings I went on to read other reviews and found I'm not alone with this experience. Unfortunately I will have to start buying elsewhere.

I really like this product, I had to buy Schwartz Ground Cinnamon once as this was out of stock. I couldn't tell any difference between this and the higher priced branded one, even when having them next to each other (of course I'm no expert).

don't have an issue with it

don't have an issue with it