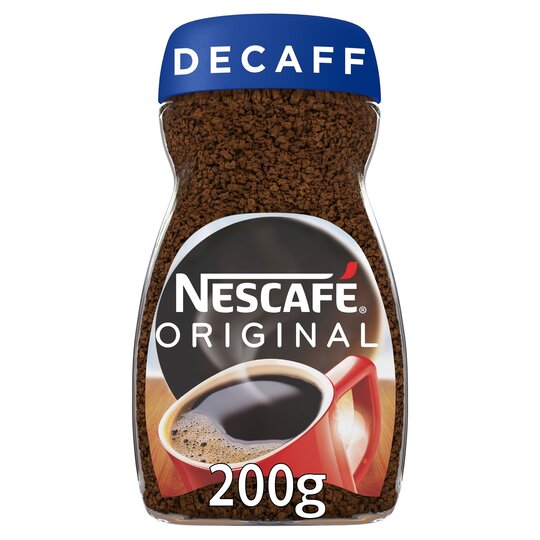 I have been buying Nescafé for 30 years.Its the best decaf.I use to collect labels.I have a tea towel and calculator from Nescafé.

Smooth, tasty and who would know it was decaff!

I drank Nescafe Original Decaff when I Iimited my caffeine intake when I was pregnant and its the best decaff coffee I've tried. It's smooth, tasty and tastes very similar to the caffeinated version. Now its my go-to hot drink. [This review was collected as part of a promotion.]

After trying several brands of Decaff, i have now found my favourite by far. Full flavour with no bitterness.

This coffee used to be my favourite. The last time I bought a sachet: 80320313E1 15:08 VP2 Best before Feb 2020 it tasted like water with milk in it! I used the same filtered water and I cannot understand how this coffee (that used to be so flavoursome) could suddenly become so tasteless. I have tried heaping the teaspoon but to no avail. Meantime the espresso nescafe is as good as ever!

Great coffee any time of day!

Been drinking this blend of decaf for a long time now and it's flavour isn't compromised one bit without caffeine. The best part for me is being able to drink it at any time of the day and more especially in the evening. It's lovely rich full flavour aroma has even surprised a few of my guests who thought they were drinking normal coffee! So just goes to show there isn't much difference at all in taste but has lots of benefits too. What's not to like! [This review was collected as part of a promotion.]

I bought this recently and could not believe it was decaffinated. It was so smooth and tasted like the Original but drinking it, I felt healthier. Great stuff, will buy again!

My Hubby came home with a jar of Nescafe Decaff instead of our usual red top jar so I decided to give it a try, and was pleasantly surprised as decaff was never something I would consider as I was concerned that I would have to comprimise on flavour. I still found the same rich flavour, in fact I couldn't tell the difference. There are days when i think I think I should cut down on my caffeine as I do drink a lot of coffee so i have decided to buy Nescafe Decaff regularly now for these times when I want to cut down and have it along side my usual red top Nescafe. [This review was collected as part of a promotion.]

Just what you need when you wake up in the morning, to kick start your day. A cup of Nescafe . [This review was collected as part of a promotion.]