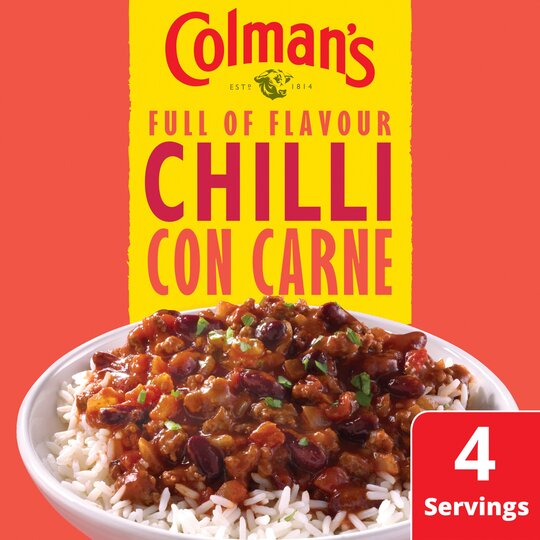 View all Packet Sauces, Mixes & Cook in a Bag

go for the hotter version, tasteless

where was the chilli?

I found this to be a very bland chilli. I know that they have another version that is "hot", but this had zero heat, which is weird for a chilli. It was also just generally bland. I added a lot of salt and pepper and it became OK. Just OK. I probably won't buy again.

I love chilli but this one was so hot I could not eat it. I thought it was something I had put on it that had made it hot, but it was the sauce. Far too hot for me.

Not enough flavour and far too much corn flour, it

Not enough flavour and far too much corn flour, it comes out a pastel shade of orange. Results in a tasteless glutinous chilli, I could've put up with it being bland had it not been starchy. Gross.

Great product saves a lot of time in cooking .

The Colemans Chilli Avon Carne feels premium, both to the touch and eye. I was really impressed with this; the instructions on the back made it really simple to follow in terms of cooking and the ingredients needed. I was also impressed with how you have a lot more control over how runny it is, when you compare it to a Jarred sauce. The flavour of this spice mix is really deep, with it being perfectly balanced. The only criticism would be there is not much in the way of heat in this Chilli. That however is easily sorted with some chilli sauce.

This looks amazing. Such a handy portion size and a quick and easy way to get a tasty meal. I love that taste!! And I recommended that chilli

Changed my mind on chilli

I've never been a fan of chilli con carne, ever since an awful meal at an aunts house i've never felt the need to try it again. As you can imagine i was a bit dubious trying this Colman's chilli con carne mix but my wife is a fan and i'm glad i gave it a shot. I don't know much about spices, what i do know is this mix managed to make a meal that was a bit like a beefy, saucy, fajita and i'm definitely down with that. There was a good level of kick for those who like it, but it wasn't overpowering and it wasn't so sustained that you're feeling the tingle for hours. The flavour is great and for being a saucy meal it's not too heavy. I'd definitely recommend you give the Colman's chilli con carne mix a try, i've even got left overs so lunch this week will be a taste sensation!

I was very disappointed with the Coleman's Chilli Con Carne Mix. We try to cook from scratch when possible but sometimes when your pushed for time you have to improvise. So as we had been out all day I thought I'd try this for tea. Easy to follow instructions - anyone could follow! Was ready in no time compared to cooking from scratch but we thought it very bland. It didn't give us enough of a kick we like with chilli. I wouldn't use this again but maybe if you like a milder chilli then it's great.

There's nothing better when sitting down to watch the football with the lads then to have a pan of chilli bubbling away for half time but it's a pain having to mic the spices so it's not too hot or too mild, well this packet mix saves that messing about. It's a simple recipe to follow on the back and can be spiced up by throwing in a few chilli's or some powder but the taste you get from the packet is just right for a mixed group. The taste of the product is strong but not overpowering and the ease of the packet means it's an easy fix for a big pot! Overall I would recommend this for a quick fix but it's no substitute for a proper homemade chilli!