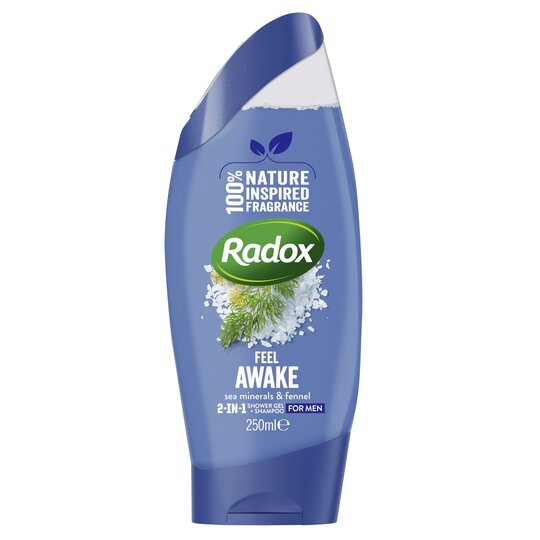 Caution: if product gets in your eyes, rinse them with warm water. Avoid eyes and other sensitive areas. As we are always looking to improve our products, our formulations change from time to time, so please always check the product packaging before use

The shower gel is good but now that radox have removed the membrane which stops leakage you waste more than you use and also makes a mess.

After many years I have had to change to another p

After many years I have had to change to another product as the bottle leaks all the time it is in use.....poor redesign of cap

It used to be alright but the cap has been cheapo re-engineered and now the contents drips on the shower floor in between using it.

I don't know what's happened to this product. I've been using it for years, and now when hung in the shower it runs out onto the shower tray, so several have been wasted. Time Radox sorted this problem out!

A Fragrant Way to start the day!

A subtle fragrance from the shower gel, belies how fragrant it is and how much the aroma seems to awaken and enliven you. The soap mix is gentle and cleansing and doesn't irritate the skin. [This review was collected as part of a promotion.]

Does the job and a fairly neutral scent

With the plethora of shower gels on the market, there will be some you love, some you hate, and some that do the job but you just feel a bit indifferent about. For me, the 250ml Radox Feel Active shower gel is firmly in the third category. The gel certainly keeps you clean without leaving an annoying smell or residue, such that it's suitable as part of a weekly rotation or throwing in your bag if you're staying away from home. But it isn't particularly pleasurable to use either. The salty smell is there, but doesn't really evoke the sea. Perhaps it's hard to evoke the sea at all from a bottle of shower gel, since it's more an experience than a single smell (unless you live in a place like I do with a lot of seaweed, and nobody wants rotting seaweed scent in a shower gel). No amount of "releases the power of the surging surf" and "ocean spray fills the air and waves crash around you" on the back of the bottle is going to make up for it, especially since nobody except me reads the back of cosmetics bottles since smartphones. The bottle itself also has one of those annoying nozzles where you have to squeeze hard enough for a bit to squirt out, and then too much at once squirts out so you have to rub it all over before you start washing so you don't waste it. Yes, I am a miser, but I'm not going to use more than what I need. Perhaps it's not helped by the gel feeling a little watered down. In short, it's perfectly usable, but it's not something I would choose unless it was on special offer. Its main advantage is that it provides a neutral/bland scent for if you don't really want to smell of anything or want to put some other scent on after you've washed. [This review was collected as part of a promotion.]

Wakes up the senses

I really enjoyed using this shower gel. The scent from the gel was invigorating in the mornings as it helped me to kickstart the day. The gel lathers very well compared to other similar products I’ve used in the past. I will definitely use this shower gel in the future and will investigate the rest of the Radox product range. [This review was collected as part of a promotion.]

This is a ok shower gel, not the best but does the job. I have used loads of different types of shower gels and only found a few I like, yes after using you feel fresh but don't get that total fresh vibe than you do from other products.i will recommend it as it smells nice but coming from the radix family I was expecting something big but didn't quite deliver. [This review was collected as part of a promotion.]

Love this product. The smell is refreshing and wakes you up. My partner event commented how nice I was smelling. I would highly recommend this shower gel. [This review was collected as part of a promotion.]

Whenever I buy a shower gel I don’t know about you but I always open the lid and have a sniff! This has a fresh and slightly sweet smell and my first thought was “yeah why not I’ll give it a go”. Well I was certainly not disappointed with this shower gel. The first thing I immediately got from it was just how easy it is to lather unlike some large brands where even with a sponge it is hard to get any bubbles! Add to that the clean fresh smell that seems to last for ages and you’ve got a great product. The flip out hook at the top is also really useful for hanging up the bottle. Overall it’s a 5 stars big thumbs up from me. [This review was collected as part of a promotion.]