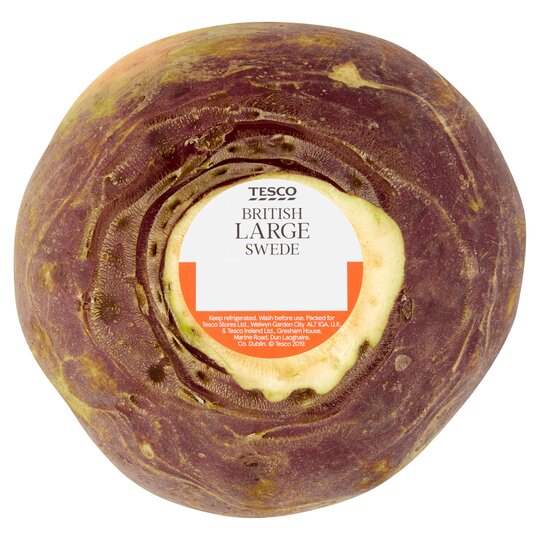 too big if small family or couple

too big if small family or couple

The swede I had delivered had been cut in 3 different ways with one small bit of outside skin left. It was wrapped but looked old and drying. Had great swedes before from tesco, not sure what went wrong this time. Please do not cut top, sides and bottoms off

Mix up your mash!

Always put off by the PREP, but took the advice of the lady at the checkout, ran it under the tap to clean it and NUKED it 20 mins in the microwave. Then used a spoon to take out the soft middle, mashed with butter and pepper and lo and behold, different topping to my increasingly more vegetarian cottage pie - nothing wrong with that!

Ordered large Swede and received something far smaller.. I grew up in an area where they grow Swedes and helped gather them when I was a Child.. So I know my Swedesor Turnips as we used to call them. Not sure if I was sent a small one instead ( no way to tell from the label) and couldn't send it back because I rely on home delivery for all my food shopping. It would be a good idea if there was a weight range so bad a better idea of what I was paying for. Dread to think what size a normal sized Turnip is! Very disappointed.

The whole truth is it's a half

not as pictured, you only get a cut 1/2 of a swede

Very disappointed. Ordered two of these LARGE swedes for a home delivery and was delivered parts of swedes (a half and a third!). Certainly didn't meet my expectations of a large swede. Wish I could post a photo!

'Large' swede have been incredibly small of late. A few times being little more than the size of a large apple! Other times when a swede might have been more sizeable they have cut them in half - meaning the swede is still small but also deteriorates very much quicker. Not acceptable Tesco! Please deliver swede which are large in size not just in name!